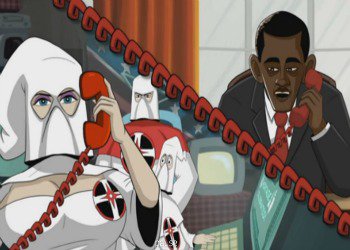 President Obama wants a deal with Iran, and various people, including Netanyahu, Israeli Ambassador Dermer, and New York Senator  Chuck Schumer don't want to play.  On Breitbart you can read that

On Thursday, Obama led a conference call with left-wing activists in which he repeatedly railed against his political opponents by using the old canard of rich Jews using their money to exert control.

Accusing critics of the deal of being “opposed to any deal with Iran”–i.e. of advocating war–Obama railed against “well-financed” lobbyists, as well as the “big check writers to political campaigns,” and  “billionaires who happily finance super-PACs.” He complained about “$20 million” being spent on ads against the deal—a subtle reference to the American Israel Public Affairs Committee (AIPAC–whose support he had repeatedly courted when running for office).

And here's this tweet from Bill Kristol, quoting an article in the Tablet.

"It’s the kind of dark, nasty stuff we might expect to hear at a white power rally, not from the President."http://t.co/1CCKQHjwlZ 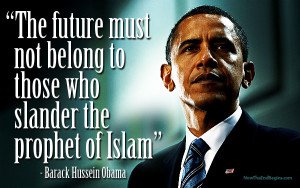 A white power rally? Seriously? This is Barack Hussein Obama we're talking about, about whom I wrote once that

As the natural son of one Muslim (Barack Sr.) and the adoptive son of another (Lolo Soetoro), Obama was raised in and traveled to Muslim countries as a youth. There he went to Muslim schools, where he was considered a Muslim, and practiced Islam, eating Halal foods, observing the Muslim Sabbath, attending Muslim divine services.

This is not the biography of white power anti-Semite, it's the biography of a Black Muslim anti-Semite. If you want a President who will play nice with Israel, and not make "coded" remarks about AIPAC,  you need to elect someone whose middle name isn't "Hussein."

As I noted in 2010, Obama is officially a Christian, which means he attended Reverend Jeremiah Wright's Chicago church for twenty years, having joined it for political reasons. However, the Reverend Wright is also an anti-Semite (and friends with Louis Farrakhan) although for Wright it's a part of his general hatred of whites.

So maybe Kristol and the Tablet should suggest that the President is talking like one of Iran's mullahs, or like the Palestinians on the Gaza Strip, and see how that plays.

I can tell you it would play—it would be denounced as racist, and Erick Erickson would never speak to Kristol again.

But you can say anything at all about white people and get away with it.

(The Obama/Klan illustration at the top is from a Stephen Colbert animated sketch.)