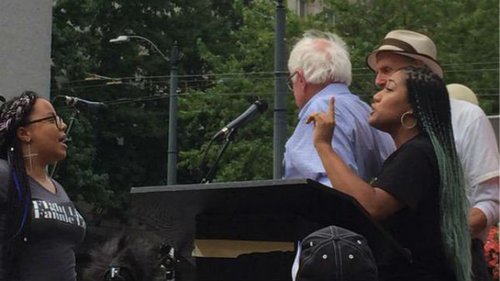 Above, Bernie (in blue) walks off without being allowed to speak

For years, deep thinkers in the Republican Brain Trust have been worrying over how the GOP can survive while being seen as the White Party, in contrast to the lovely rainbow coalition of the Democrats. But I’ve been pointing out that black activists will increasingly view the Democrats as, rightfully, their personal Black Party, a development which can’t help but cause nagging second thoughts among Asians, Hispanics, and liberal whites.

From The Hill today :

Protesters who claimed affiliation with the Black Lives Matter movement stormed the stage during a rally for Sen. Bernie Sanders (I-Vt.) in Seattle on Saturday, taking over the microphone and forcing Sanders to leave without ever speaking.

Moments after Sanders took the stage at Westlake Park, two women and one man climbed the stage and confronted the Democratic presidential candidate, demanding a chance to speak.

After several moments of confusion and confrontation, an event organizer took the microphone and said the protesters would be allowed to speak before Sanders. Some in the crowd booed.

One protester, who identified herself as Marissa Johnson, began by saying, “I was going to tell Bernie how racist this city is — with all of its progressives — but you’ve already done that for me. Thank you.”

Johnson spoke, among other things, about police violence in Seattle, mentioning a federal investigation into the city’s law enforcement that resulted in the appointment of a monitor to make sure Seattle police were complying with the terms set forth by the Justice Department.

“Bernie says that he’s all about the people and about grassroots. The biggest grassroots movement in this country right now is Black Lives Matter,” she added.

She then mentioned the anniversary event that sparked the Black Lives Matter movement — the shooting of an unarmed black teenager named Michael Brown by a white police officer in Ferguson, Mo. last year.

Some in the crowd jeered the protesters and yelled “get off the stage,” but others replied “let her talk.”

At times, shouts of “arrest her” were audible.

After the four-and-a-half minutes, protesters did not relinquish the stage.

“If you care about Black Lives Matter, as you say you do, you will hold Bernie Sanders specifically accountable for his actions,” Johnson continued.

She mentioned a similar interruption by Black Lives Matter activists during the annual progressive NetRoots Nation gathering. Protestors flooded the stage early on in the event and shouted down Democratic presidential hopeful Martin O’Malley as well as Sanders.

“Bernie, you were confronted at NetRoots at by black women,” Johnson said before adding, “you have yet to put out a criminal reform package like O’Malley did.”

After the protesters and organizers continued the confrontation on stage, Sanders waved to the crowd and walked off the stage.

Obviously, most black voters don’t care much about Bernie Sanders one way or another, and if they hear about these incidents they would probably be a little embarrassed by them. But, our culture elevates, sanctifies, and sometimes compensates the role of Civil Rights Activist, so you get a lot of individual black attention hounds competing to be most obnoxious.

What, say, Korean-American voters think of this trend is another question.