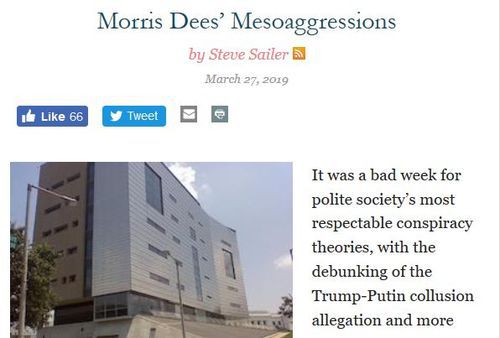 It was a bad week for polite society’s most respectable conspiracy theories, with the debunking of the Trump-Putin collusion allegation and more implosions among the conspiracy-theory-mongers at the Southern Poverty Law Center. …

One conspiracy theory is that the current purges of the SPLC’s Old Guard are the result of a conspiracy by unnamed parties to get their hands on the nearly half-billion dollars in assets that supersalesman Dees has piled up in the SPLC’s onshore and offshore accounts over his 48 manic years of always-be-closing fund-raising.

So let’s step back and think about “conspiracy theory” in the current conceptual vocabulary.

The term “conspiracy theory” is largely a pejorative about the social standing of those offering the theory.

After all, very little gets done in this world without people plotting together to take action, contrivances that at least some hostile outsiders would consider nefarious. So conspiracies, broadly defined, are everywhere.

In 21st-century America, however, to call something a “conspiracy theory” is to say that the kind of person to whom the idea appeals, such as Randy Quaid’s not-quite-right-in-the-head Vietnam-vet character in Independence Day (or Randy Quaid in real life lately), is disreputable. …

Similarly, Dees’ lucrative conspiracy theory about how America is under siege from an ever-vaster shadowy network of “hate groups” is seldom labeled a “conspiracy theory.”

After all, Dees is terribly respectable. He holds nearly two dozen honorary degrees, has been played by Corbin Bernsen in a TV movie, and is a member of the Direct Marketing Association Hall of Fame. And, no doubt, not all of Morris’ four ex-wives hate him quite as much as some of them do.