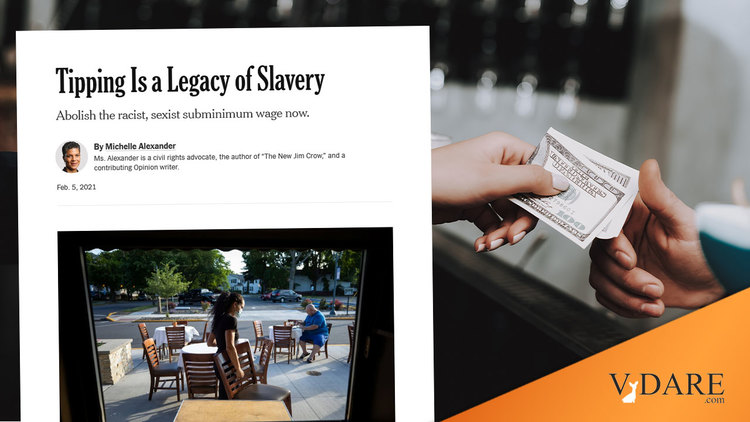 Michelle Alexander In The NYT: Tipping Is A Legacy Of Slavery

See, earlier: Michelle Alexander In The NYT: "None of Us Deserve Citizenship"

Tipping Is a Legacy of Slavery

Ms. Alexander is a civil rights advocate, the author of “The New Jim Crow,” and a contributing Opinion writer.

Once upon a time, I thought that it was perfectly appropriate for restaurant workers to earn less than minimum wage. Tipping, in my view, was a means for customers to show gratitude and to reward a job well done. If I wanted to earn more as a restaurant worker, then I needed to hustle more, put more effort into my demeanor, and be a bit more charming.

I thought this even when I was a waitress, working at a burger and burrito joint called Munchies during the summers when I was a college student. Collecting tips gave me a certain satisfaction. I liked sweeping dollar bills and coins off tables into the front pocket of my blue apron. Each time someone left me a big tip, anything more than I expected, a tiny jolt of dopamine flooded my brain as though I had just hit a mini jackpot. I got upset when people stiffed me, walking out and leaving nothing or just pennies — a true insult — but whenever that happened I reminded myself that I might get lucky next time. Or I would do better somehow.

Never did it occur to me that it was fundamentally unjust for me to earn less than the minimum wage and to depend on the good will of strangers in order to earn what was guaranteed by law to most workers. I had no idea that tipping was a legacy of slavery or that racism and sexism had operated to keep women, especially Black women like me, shut out of federal protections for wage labor. I did not question tipping as a practice, though looking back I see that I should have.

The first week on the job, one of my white co-workers, a middle-aged woman from rural Oregon, pulled me aside after she watched a group of rowdy white men, who had been rude and condescending to me throughout their meal, walk out the door without leaving a tip. “From now on, dear,” she said, “I’ll take the rednecks. Just pass ’em on to me.”

Did I mention that the rednecks tried to touch my hair?

As everybody knows, white men, being evil, are bad tippers, unlike sainted black women customers, who never ever complain in restaurants and still leave lavish tips.

But if, just speaking theoretically, black customers were ever to stiff the wait staff, just remember, that they did it not because they are cheap and feel entitled but because they are daring to Fight the Legacy of Slavery.