Bettie Coates Is Lucky to Be Alive

Usually a head-on crash at highway speeds leads to fatality, as evidenced by the deaths of Jim and Margie Rook, four-year-old Tyler Evans, film director Bob Clark and his son Ariel, paramedic Ryan Ostendorf and nursing student Natalie Housand — Americans killed by illegal aliens who have been remembered on VDARE.com. 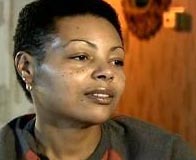 Even so, Bettie Coates suffered serious injuries that have severely altered her life. Watch the video included in the link below to get an idea of the pain and cost to one American family caused by Washington's open borders policy.

Coates, who had recently moved back to North Carolina from Pittsburgh, was trapped inside her Ford Mustang, which was crushed in the collision.

"I just remember a lot of blood just running down my face," she said.

The wreck shattered her thigh and ankle bones, and she underwent three surgeries during 29 days in WakeMed. She has moved in with her grandparents in Northampton County for the next few months while she recuperates.

Her lack of mobility makes it difficult to keep up with her 2-year-old son, Donovan, she said.

"He wants me to play with him. He doesn't understand why Mommy can't do certain things," she said.

Coates said she has thought about writing a letter to Cruz to let him know how hard it is for her not to play with Donovan, not to go check on the construction of her house and not to return to work.

"He's taken a lot from me," she said. "For him to have sneaked into the country (and) then for him to just think he can do whatever he can do and get away with it is very frustrating." [Woman Injured in Wrong-Way Wreck Angry, Thankful, WRAL-TV November 27, 2007]

The accused, Eblin Fabiel Ocampo-Cruz, has a long rap sheet and should not have been in this country at all. Why wasn't this dangerous man deported after his first conviction? His record shows that he is a poster boy for the need to incarcerate and deport.

At the time of the wreck, Cruz was on probation for several offenses, according to court records.

In February 2006, he was convicted in Durham of DWI. A month later, he was convicted of misdemeanor unauthorized use of a vehicle and misdemeanor breaking and entering. In May 2006, he pleaded pleaded guilty to reckless driving and passing an emergency vehicle. Last October, he was charged with resisting an officer, and he was charged with possession of stolen goods in December. [Man Charged in Wrong-Way Wreck in U.S. Illegally, WRAL-TV October 31, 2007]