Kansas — Another Death That Never Should Have Happened 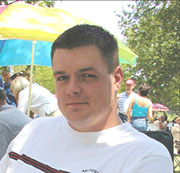 Everyone who knew paramedic Ryan Ostendorf agreed that he had a tremendously promising life ahead, as a cardiologist and married to his long-time girlfriend, Meagan Kennedy. But that future is not to be, because a previously deported drunk-driving illegal alien crashed head-on into Ryan's Jeep Cherokee and killed him.

A resident of Lawrence, Kansas, 28-year-old Ryan was driving to his paramedic job in Topeka when his car was hit last December. When the ambulance arrived on the scene, the paramedics were shocked to find the body of their friend and co-worker.

Victor Anzua-Torres was sentenced in Topeka last week to a measly 13 years and nine months in jail for the head-on crash, which was the maximum sentence he could have received.

Anzua-Torres had a blood-alcohol level of 0.26 percent, more than three times the legal limit of 0.08, authorities said. He had no driver’s license, had a prior drunken-driving arrest and had been deported as an illegal immigrant once before. [Drunken driver gets 13 years for fatal wreck, Lawrence Journal-World, 6/30/06]

Prosecutor Karen Wittman noted that Anzua-Torres insisted on driving to show how "bad" he was even though he was very drunk and a friend offered to drive. (Driving while drunk is believed by many hispanics to show macho attributes — a reason why they are hugely overrepresented in drunk driving crashes.)

At sentencing, Ryan's friends and family spent two hours explaining how his death left a hole in their lives that would never go away.