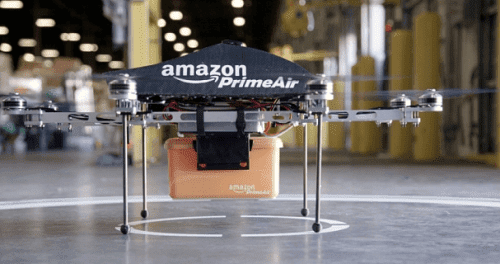 Automation: Jeff Bezos Predicts Amazon Drones Will Be As Common as Delivery Trucks

Above, the Amazon Prime Air drone may soon be infesting American neighborhoods.

The Amazon company has been a leader in replacing human workers with automation. Its Kiva semi-automated warehouse system enables orders to be processed and shipped rapidly. The robots bring the merchandise to human workers who pack the items up in boxes for shipment. Manual dexterity keeps humans employed in that department — for now. The company is looking for robots that can perform that function also.

Now Bezos is talking up his drone delivery scheme, as he first announced on Sixty Minutes in 2013. In a recent interview with the UK Telegraph, he remarked, “One day Prime Air deliveries will be as common as seeing a mail truck. The technical problems are very straight ahead. The biggest issue, or the biggest thing that needs to be worked on, is the regulatory side.”

It’s surprising how little the safety aspect has come up in the discussion of drones. They have spinning blades and have been know to crash into people. Recent news reports have emphasized the danger of drones colliding with airplanes potentially causing a major crash, but they have already hit a number of people. In June, a woman was struck and knocked unconscious by an errant drone in Seattle. In Marblehead, Massachusetts, a man was hit on the head by a drone as he attended a Memorial Day parade last May. The March issue of the Scientific American had a list of other injuries in a piece tiled, 5 Epic Drone Flying Failures.

If drones were to take over many of Amazon’s delivery chores, that would be a case of flying robots taking American jobs, as opposed to the largely land-based machines up to this point. In any case, UPS drivers should be concerned.

No surprise with the trend toward automation — it’s only going to get worse. Oxford researchers have predicted that nearly half of US jobs are susceptible to being computerized by 2033.

Plus, America won’t need any immigrant workers in the future post-human workforce.

Amazon delivery drones are still “years” away, but CEO Jeff Bezos said someday they will be “as common as seeing a mail truck.”

Bezos told the Telegraph in London that the biggest hurdle Prime Air has to clear isn’t related to technology, but regulators. END_OF_DOCUMENT_TOKEN_TO_BE_REPLACED