Industrial robot manufacturers have a marketing problem: they want potential customers to be able to purchase the labor-saving machines without frightening the hired help. If employees think they are about to be replaced by a smart machine, unpleasant workplace tensions might result.

So manufacturers have to adjust their language to a non-threatening vocabulary. One choice has been “co-bot” as in “collaborative robot” to ease the sting. Lately it seems the co-bot term has disappeared, perhaps sounding too gimmicky. But the collaborative idea has remained to emphasize the improved efficiency that smart machines provide to the remaining humans. 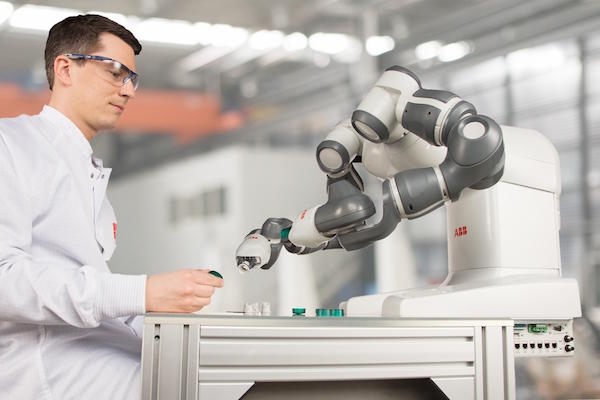 The YuMi robot is marketed as the “world’s first collaborative dual-arm robot” by manufacturer ABB. The machine is safe for close use, unlike larger industrial robots which can be dangerous.

The show-and-tell segment about the robot on Fox Business Tuesday was surprisingly straightforward with the details. The YuMi can be trained to do tasks by a human moving its arms in the appropriate fashion, meaning that advanced coding is not needed for operation.

Manufacturer ABB says YuMi would be a good choice for small to medium-sized businesses with its moderate cost and advanced capability. The machine can do small parts assembly, varieties of manufacturing and food production. The representative William Studebaker said, “This robot costs roughly $50,000, it works 24/7 365 days of the year with no healthcare or overtime” — an obvious pitch about replacing those greedy human workers.

Host Stuart Varney asked, “It’s going to take a few jobs away, is it?”

“It’s likely going to take some jobs away,” Studebaker replied. “If you think about what this is doing, though, it brings a lot more efficiency to production. These are a lot of technical skills that this robot does that people can’t do, particularly when it comes to small parts assembly.”

There are cheaper simple manufacturing robots, like Baxter, that go for about half the price ($22,000) but Baxter has only one arm and the YuMi is supposedly better with finer movements.

There’s plenty more employment-snatching robots where YuMi came from, and the process of human replacement by machines is just getting started. Oxford researchers forecast in 2013 that nearly half of American jobs were vulnerable to machine or software replacement within 20 years. Rice University computer scientist Moshe Vardi believes that in 30 years humans will become largely obsolete, and world joblessness will reach 50 percent. The Gartner tech advising company believes that one-third of jobs will be done by machines by 2025. Forrester Research Inc. has a more optimistic view, that there will be a net job loss of 7 percent by 2025 from automation. The PwC forecast from March was only slightly less dire than the Oxford numbers.

The unemployment rate during the worst of the Great Depression was 25 percent, but an array of experts over several years have put the level of technological unemployment at up to half in just a couple decades.