Stores are certainly suffering since Amazon brought its robot battalions onto the retail field. The Kiva robots are an integral and necessary part of the millions of products that Jeff Bezos sells online and quickly ships to customers. Amazon purchased the Kiva robots in 2012 for $775 million; before that, human workers pushed carts around warehouses, walking miles daily to pick the items customers had ordered.

Below, the little orange Kiva robots scoot under racks of merchandise and deliver them to humans who fulfill the orders. 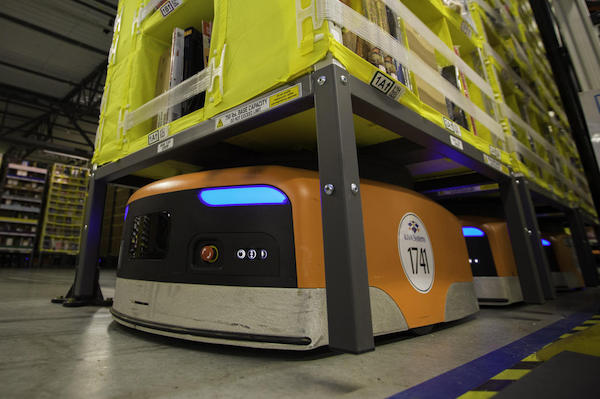 Today, many people find it easier to shop online than to spend hours to drive through traffic to a store that may not have what they want. Amazon’s recent record-breaking Cyber Monday following Thanksgiving illustrates its increasing success, along with Jeff Bezos’ ascent to becoming the richest man in the world.

The universe of work is undergoing a fundamental transformation because of automation and computers, and we’re just beginning to see how the future may function. Massive job destruction is a given, according to numerous tech experts. Oxford researchers forecast in 2013 that nearly half of American jobs were vulnerable to machine or software replacement within 20 years. Rice University computer scientist Moshe Vardi believes that in 30 years humans will become largely obsolete, and world joblessness will reach 50 percent. The Gartner tech advising company believes that one-third of jobs will be done by machines by 2025. The consultancy firm PwC published a report earlier this year that forecast robots could take 38 percent of US jobs by 2030.

Amazon may be adding employees now, but the company’s long term plans are to replace workers in their function of filling and packing customer orders as shown by the company’s annual Picking Challenge competition for robots.

And plenty of other industries from agriculture to accounting are incorporating more smart machines to save money.

So it makes no sense for America to continue importing millions of immigrants who expect to work here, right?

Amazon employs over half a million workers. In the past year alone, the online retailer has added roughly a quarter of a million employees to its headcount, and 238 cities across the country are competing to become the location of Amazon’s second headquarters, which is estimated to create 50,000 more Amazon jobs.

But according to Dave Edwards and Helen Edwards at Quartz, Amazon may be killing more jobs than it creates. Quartz found that there are 170,000 fewer retail jobs in Amazon-related industries — like bookstores, grocery stores and clothing stores — in 2017 than the year before.

According to their calculations, even if Amazon maintains an impressive 43 percent personnel growth for another year, the total number of workers employed in Amazon-related industries would still decrease by 24,000.

So where are the jobs going? Quartz suggests that an increase in robotic workers could be to blame. They estimate that Amazon added 75,000 new robots to their workforce in 2017 for a total of roughly 100,000. By these approximations, machines constitute 20 percent of all Amazon “employees.”

More robots don’t always mean fewer jobs, but it may in the case of Amazon. Edwards and Edwards write, “While it may be difficult to prove causality, it’s not difficult to see the correlation between a decline of 24,000 human employees and an increase of 75,000 robot employees.”

Amazon attests that the investment in technological workers has improved efficiency. CNBC reports it takes 90 minutes on average for a human Amazon employee to find a product and package it, but with the help of robots, a product can be found and packaged in as little as 13 minutes.