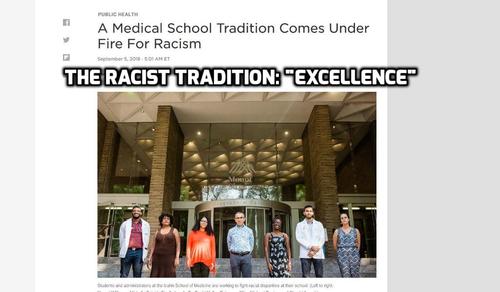 A Medical School Tradition Comes Under Fire For Racism

Senior medical student Giselle Lynch has plenty of accomplishments to list when she applies for a coveted spot in an ophthalmology residency program this fall.

But one box she won't be able to check when she submits her application is one of the highest academic awards medical students can receive, election to the honor society Alpha Omega Alpha.

It's not because she didn't excel. It's because her medical school, the Icahn School of Medicine at Mount Sinai in New York City, put a moratorium on student nominations because it determined the selection process discriminates against students of color.

The award is open to the top 25 percent of a medical school's graduating class and can be a valuable career boost, making students more competitive for desirable residencies and jobs.

"AOA perpetuates systems that are deeply flawed," says Dr. David Muller, the dean for medical education at Icahn. "We can't justify putting people who are historically at a disadvantage at an even greater disadvantage. It just doesn't seem fair to dangle in front of our students an honorific that we know people are not equally eligible for."

Over the past five years, around 3 percent of students chosen for the distinction at Icahn were from a racial background that is underrepresented in medicine, which includes blacks and Latinos. In that same period, about 18 percent to 20 percent of each graduating class at Icahn came from those groups.

The school made the change after Lynch led a group of fellow students in an effort to fight inequality at Icahn. The students collected data on how many students from underrepresented minorities were nominated to the honor society at Icahn and presented it in a series of meetings with school leadership last year.

Lynch, who is black, recalls one particularly moving meeting when they showed photographs of Icahn's past AOA students — and black and Latino faces were conspicuously sparse.

“Where are we? We’re nowhere here,” says Lynch, remembering her reaction. “AOA is an award of student excellence. What was the argument that was being perpetuated about us if we’re not being included?”

Announced in May of this year, the decision at Icahn was a controversial one, because many students and faculty fear that not participating in the award puts Icahn students at a disadvantage when competing for slots in residency programs. …

Sure, not rewarding excellence in medical studies will likely get more patients dead in the long run, but dead patients are a small price to pay for reducing the number of microaggressions wounding the amour propre of the diverse.