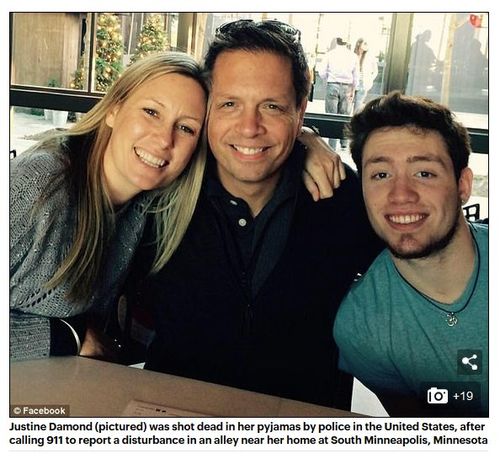 A white Australian woman (Justine Damond, right) was shot by a Somali police officer (Mohamed Noor, above) on the Minneapolis Police Department, not in self defense, but apparently for no reason, i.e. carelessness or incompetence of some kind.

The cop with only two years experience who shot pajama-wearing Minneapolis woman, 40, dead through the DOOR of his squad car while his bodycam was off after she called 911 over 'home intruder' By Hannah Moore and Josh Hanrahan For Daily Mail Australia

This seems to be the kind of reckless incompetence you would expect, if you put a Somali in police uniform and give him a gun. We know that Minnesota has Somalis because of refugee resettlement, but why does it have Somali police officers?

Most police departments require you to pass various tests, and go through rigorous training—from which you may be washed out. How did this happen?

I happen to know the answer, because  Peter Brimelow wrote it up in 2003:

It's not as if the problems of importing unassimilable refugees are not obvious. Compare these two stories. The first was occasioned by the murder of an aid worker in Africa:

“One question we should ask in the aftermath of Dr Tonelli's murder is: why are there so many mentally disturbed people walking on the streets of all our towns? We have as yet no statistics on the extent of the problem, but it is undeniably prevalent. Whether you live in Berbera, Hargeisa, Burao or Borama, you come across them every day. In fact you live in fear of them. They are mainly men, many of them in the prime of life, and often armed with knives, swords or heavy rocks. [VDARE.COM emphasis] Rakiya A. Omaar in the Somaliland Times, Oct 19, 2003

The second was occasioned by the shooting of a Somali in America:

“[Minneapolis Police Chief Robert] Olson said he particularly wants more Somalis to join the Police Department, adding that their presence would 'help diversify the force' further. Currently, there are no Somali police officers in Minneapolis.

“[Professional Somali leader Omar] Jamal said the meeting followed several discussions with Olson since the death of Abu Kassim Jeilani, 28, who was killed March 10 near E. Franklin Av. and Chicago Av. S. Police confronted him after he was seen walking on Franklin carrying a machete and a crowbar. He had been hospitalized recently for mental illness. [VDARE.COM emphasis] Minneapolis police, Somalis seek truce, Terry Collins, Minneapolis Star Tribune, Mar 21, 2002

It is at least possible that Abu Kassim Jeilani would still be alive if the U.S. had chosen to aid him in his native continent. (Plus, of course, some native-born Americans would be eligible for the police jobs that Chief Olson is now earmarking for immigrants.) As VDARE.COM has noted before, by bringing refugees here, the U.S. does no favors to them or to itself.

So because MPD shot, in self-defense, a Somali maniac armed with a machete and crowbar, Chief Olson thought there should be be more Somali cops on the force.  This is the predictable result.