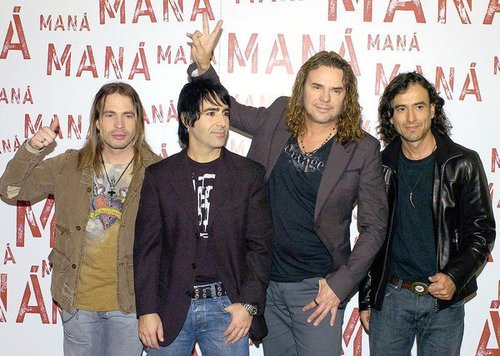 The Latin Grammy award is, according to Wikipedia, " an award by The Latin Academy of Recording Arts & Sciences to recognize outstanding achievement in the Latin music industry. The Latin Grammy honors works produced anywhere around the world that were recorded in either Spanish or Portuguese and is awarded in the United States."   Oh, and guess what?  The annual ceremony is broadcast by Univision.

This year's ceremony, held on November 19th, was the scene of a big, self-righteous political statement.   Here is how it was reported (positively) on the Think Progress website, in an article entitled One of Latin America's Most Successful Bands Used the Latin Grammys To Call Out Racism:

The 2015 Latin Grammys turned political Thursday night when the Mexican rock band Maná and norteño-band ensemble Los Tigres del Norte unfurled a sign on stage reading, “Latinos unidos no voten por los racistas” (or “United Latinos, don’t vote for racists”), an intentional jab at some of the hateful rhetoric that some 2016 presidential candidates on the right have espoused about Latinos.   Soon after Maná and Los Tigres del Norte finished the immigrant anthem Somos Mas Americanos (“We Are More American”), the two groups jointly held up the sign while the audience cheered.

The fact that the banner was unfurled after the singing of  Somos Mas Americanos is quite significant, as the song affirms that illegal aliens are "more American than any son of the Anglo-Saxon".   So the song is more than political, it is an ethnic attack on the core, founding  population of the United States of America.

For more on the song and the Tigres del Norte group, see my article  "SOMOS MAS AMERICANOS" - We Are More American"

Maná posted a video link on Twitter, urging Latinos not to vote for racists and promoting a website to register or pledge to vote sponsored by the immigrant advocacy group Voto Latino. In Spanish, he said, “Hi friends. How are you? I’m here at the Grammys. I want to give you some news that’s very interesting. The United States is the country with the second highest Spanish-speaking population on the planet after Mexico. That means there is a power and a will here. Use that power to go out and vote. Register and vote for the candidate that is most humane.”

The Mexican rock group Maná, composed of Euro-Mexicans, has meddled in U.S. politics before.  For more information , see: Here's what the Think Progress article had to say about the political angle:

The two groups didn’t call out any particular candidates. But Republican presidential candidate Donald Trump has largely built his campaign by denigrating Mexican immigrants as rapists, drug dealers, and killers. Trump has also called for extreme measures, like mass deportation for undocumented immigrants, many of whom have personal connections to Latinos.