Bishop Anthony B. Taylor recently met with Pope Benedict in the Vatican, and the subject of immigration of questionable legality appeared to be high on the agenda.

The Arkansas Bishop sounded quite upbeat about Hispanic Catholics filling southern pews, after his years of suffering with the preponderance of English-speaking Protestants who have been the major population in the Bible Belt for generations.

Bishop Taylor complained, “This blessing and opportunity to welcome and defend the newcomer is felt especially in our overwhelmingly Protestant states of Arkansas and Oklahoma. When I was a child, Catholics constituted 3 percent of the population of our province — we were weaker than the beer! — and the local Church was almost entirely English-speaking.”

Below, a patriotic Catholic in Ohio prepared to protest his church’s open-borders position and distribution of bogus matricula identification cards. A 2009 Zogby poll showed 64 percent of parishioners preferred immigration enforcement rather than the mass amnesty preferred by Catholic elites. 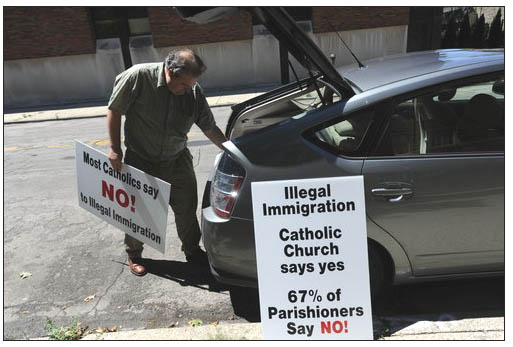 The bishops of Arkansas and Oklahoma met privately with the pope and each gave a presentation on concerns from their dioceses.

Archbishop Paul S. Coakley of Oklahoma City gave an overview of the state of the Church in the province of Oklahoma and Arkansas, and Bishop Edward J. Slattery of Tulsa spoke about the work of Catholic Charities.

Before addressing the pope, Bishop Taylor introduced his guest, Deacon Andrew Hart of Little Rock, a seminarian at the North American College in Rome who will be ordained a priest in July. Hart met the pope for the first time in January 2010 when the pope had a private audience for the students for the college’s 150th anniversary (See related story on Hart’s experience here ).

“For me, it was a wonderful experience of the universality of the Church and of the primacy of the See of Peter,” Hart said. “People from every nation and background have been coming to this city for thousands of years to greet the successor of St. Peter and to see the man through whom the Holy Spirit continues to guide the universal Church.”

Bishop Taylor, a former Oklahoma priest, explained to the pope about influx of Hispanics from Mexico and Central America to the area.

“This blessing and opportunity to welcome and defend the newcomer is felt especially in our overwhelmingly Protestant states of Arkansas and Oklahoma. When I was a child, Catholics constituted 3 percent of the population of our province — we were weaker than the beer! — and the local Church was almost entirely English-speaking. Thanks to the large waves of immigrants from Mexico, Central America and Vietnam during the last 40 years, the Catholic population in our two states has doubled, and in many parishes Spanish-speaking immigrants now constitute more than half of the Catholics in the area.”

He told the pope that 55 percent of Catholics in the Arkansas are Spanish-speaking immigrants and their children.

“When I was ordained in 1980, Mass was offered in Spanish in only one parish in the entire Archdiocese of Oklahoma City — now it is offered in 37 parishes — 1/3 of all the Catholic churches — and the same dramatic growth has occurred in Arkansas. And although we have too few priests who are fluent in Spanish, I am proud of how committed most of our priests are to doing whatever they can to equip themselves to be able at least to administer the sacraments in Spanish and respond to their parishioners’ needs in a culturally sensitive way. People can tell when their pastor cares about them and they respond to his love even when his command of Spanish is poor.”

Bishop Taylor lamented that the Church is one of the few institutions in the state that will speak out against “hurtful” immigration legislation.

“We bishops and many of our priests take very seriously our obligation to speak out in defense of their human rights,” he said “Moreover, we strive to make our parishes a place of welcome and safety for our immigrant brothers and sisters. Often we have to challenge even our own English-speaking Catholics to open their hearts to welcome new immigrants, most of whom — at least initially — lack proper documentation and are forced by their unauthorized presence to live in the shadows, subject to all kinds of discrimination and economic exploitation. Yet while these members of our Church continue to face many problems and difficult challenges, we have also experienced much good will extended to them by their English-speaking fellow parishioners.”

In an e-mail to Arkansas Catholic, Bishop Taylor said, “The Holy Father stated that immigration has been a recurring topic of concern addressed by almost all of the groups of American bishops who have had their ‘ad limina’ visits so far and he commended our local Church for our important work welcoming and serving the immigrants in our midst.”

Another highlight of Bishop Taylor’s first “ad limina” visit to the Vatican was preaching at the tomb of Blessed John Paul II at St. Peter’s Basilica March 20 for the closing Mass. The location of the Mass was inspiring for the bishop because he was a student at the North American College in 1978 when the first Polish pope was elected and he served as a deacon for a Mass at the college in 1979 when the pope visited.

“My brothers, we have been chosen by the Holy Spirit to carry out in our own dioceses the same mission that God entrusted to Pope John Paul II for the entire world, serving a humanity which continues to suffer physical and spiritual paralysis — including the spiritual paralysis of secularism and consumerism, and the resulting physical paralysis of unjust laws regarding immigration, abortion and now the specter of the administration’s contraceptive mandate.” (Read complete homily here )

Heads of dioceses are required to make periodic trips to the Vatican called “ad limina apostolorum,” which means “to the threshold of the apostles” Peter and Paul, who were martyred in Rome. The visits include meetings with the pope and with Vatican officials to share information and concerns, but they are structured around Mass and other moments of prayer.