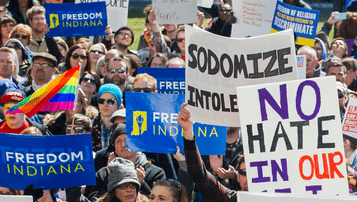 From the New York Times

Recently, the most important thing in the world, besides strategically crucial Yemen and whether or not somebody who is 1/4th Jewish is allowed to tweet Jewish jokes, is whether wedding photographers and cake bakers in Indiana can be permitted to decline to work gay marriages for religious reasons.

Speaking for his fellow members of the marginalized and oppressed everywhere, Apple CEO Tim Cook demanded that the full weight of the state be brought down upon any self-employed individuals in flyover states who pick up some extra money working weekends in June if they dare admit they are uncomfortable servicing gay weddings.

Walmart has now also joined the coalition of the powerless to whip those hater small business people into line with the New Order. How dare anyone not maximize profits?