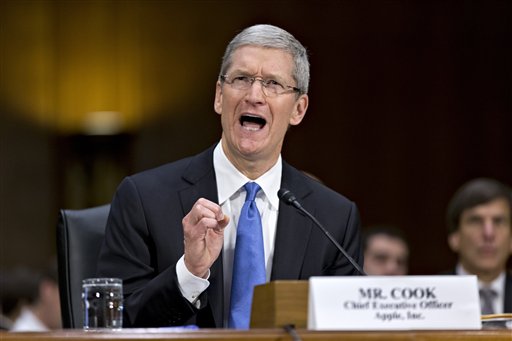 One might think that the top executive of one of the world’s premier companies would appreciate the rule of law as necessary to conducting business, but not so much for Tim Cook (pictured), the successor to Steve Jobs.

Perhaps he is just using the morality dodge because he doesn’t want to say that multi-millionaires depend on cheap labor to become billionaires. Cook is estimated to have a net worth of around $400 million which makes him something of a slacker in Silicon Valley.

But even billions don’t slake the thirst of the powerful for cheaper labor. Amnesty mouthpiece Mark Zuckerberg, the Facebook founder, is worth more than $19 billion, but insists upon further flooding America with exploitable wage slaves from abroad in order to keep pricier citizen workers unemployed.

Zuckerbucks also attempts to frame worker exploitation as an issue of virtue, remarking in November that amnesty for illegal alien kids is “one of the biggest civil rights issues of our time.”

Hint to billionaire whippersnappers: the real civil rights movement was a struggle to obtain Constitutionally guaranteed rights for black American citizens who had been denied political equality because of race. Interestingly, it is black citizens who are arguably the most harmed by the open borders policy of Washington elites of both parties. But now plutocrats twist black Americans’ own political struggle into propaganda against them and other citizens.

Back to Tim Cook:

On Saturday, Apple CEO Tim Cook showed up at the United Nations to talk about American politics. Cook, who is openly gay, talked in vague terms about facing discrimination, stating that after seeing a cross burning as a child, his life was “changed… forever.”

Cook labeled opposition to illegal immigration a form of discrimination, stating that amnesty measures should be undertaken: “Do not do them because they are economically sound—although they are—do them because they are right and just.” With regard to the Employment Non-Discrimination Act (ENDA), he stated, “Now is the time to write these basic principles of human dignity into the book of law.”

The tech executive linked his own company’s production of handicap-accessible hardware to these political issues, both sequentially and in his word choice. Cook said that he keeps photos of Martin Luther King, Jr. and Robert F. Kennedy on his desk for inspiration, as symbols of their sacrifices in the name of civil rights. “They serve as a reminder to me every day that regardless of the path one chooses, there are fundamental commitments that should be a part of one’s journey. For this reason and many others, I was very fortunate that my life’s journey took me to Apple.”

As evidence for his company’s inspiration by civil rights heroes, Cook cited the universal accessibility of its products. “We never, never ever analyze the return on investment,” Cook said of gadgets usable by the physically disabled. “We do it because it is just and right, and that is what respect for human dignity requires.” Later in the speech, he reused the phrase “right and just” to describe the immigration reform measures currently under consideration by Congress.