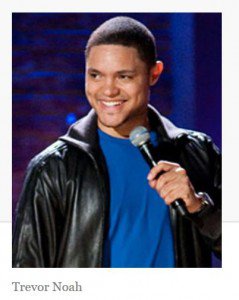 Just a day after Trevor Noah was welcomed by some as an exciting new choice to host “The Daily Show,” the South African comedian, who is little-known in the United States, has come in for criticism as writers and fans have begun to pore over his body of work. The biggest target has been the archives of Noah’s Twitter feed, where he tried out material that targeted Jewish women, heavier women, Jews and Israel.

Not that Alyssa Rosenberg takes personally the topics of Jewish women, heavier women, Jews or Israel.

What connects the tweets that have landed Noah in hot water is less that they represent political offenses of the same magnitude than that they’re all embarrassingly awful jokes. 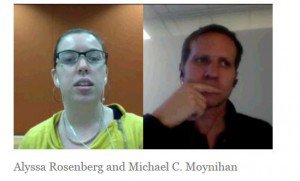 This seems to be the emerging party line: We’re not against funny jokes, but these were unfunny jokes.

But, first, this part-black, part-Jewish, part-white gentile guy from South Africa — whom I had never heard of until yesterday — has apparently sent out thousands of tweets. I would suspect that most of them aren’t 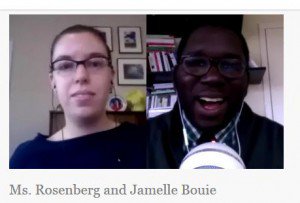 as good as the material he hones for shows he gets paid for. Tweets are usually worth about as much as you paid for them. For example, here are four consecutive tweets that Ms. Rosenberg saw fit to share with the world yesterday:

Alyssa Rosenberg @AlyssaRosenberg · Mar 30 Culture is hard to submit to the rules of politics for the same reasons it has great power: it’s protean and unpredictable and we respect it

Alyssa Rosenberg @AlyssaRosenberg · Mar 30 We want more positive depictions of women, but we don’t want to prevent depictions of violence that are powerful commentary.

Alyssa Rosenberg @AlyssaRosenberg · Mar 30 .@Glenn__Kenny gets at something tricky about left critiques of culture: folks want things to change, but are hesitant to organize to do so.

But let’s look at why Rosenberg feels Noah’s handful of notorious tweets are “embarrassingly awful jokes” — not because they are inept, but because they make fun of types of people she feels shouldn’t be made fun of, such as herself.

Back to Rosenberg at the 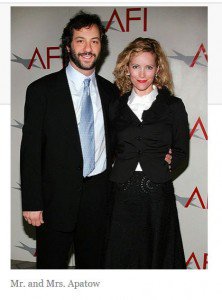 Riffs about fat chicks are the stuff of schoolyards. Even Judd Apatow movies stick with implied shiksa humor rather than jokes about Jewish women.

Kind of like how Judd personally sticks with shiksas rather than with Jewish women.

In other words, Ms. Rosenberg says jokes about shiksas (a hostile ethnic epithet, by the way) are okay, but jokes about Jewish women are NOT.

By the way, it’s not surprising that Apatow’s gentile actress wife Leslie Mann looks great in this photo at some American Film Institute shindig, but notice how great Apatow looks, too. If Jewish women got to hold an NBA-style draft for Jewish husbands, Apatow would have been a lottery pick. The resentment Jewish women feel over this pattern of the top Jewish men marrying shiksas is one of the main drivers of many of the current manias, but you aren’t supposed to talk about that.

And at least one of Noah’s jokes about Jews and Israel — a tweet about almost accidentally hitting a Jewish kid while driving a German car — seems more like a Justine Sacco-style inept joke about anti-Semitism than an actual biased quip. (The others show even less sophistication.)

It’s rare to see an incident that unites so many constituencies in shared ire. … 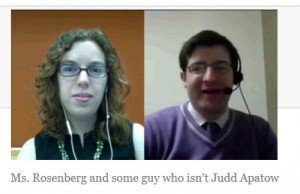 The tweets rely on the idea that simply invoking “fat chicks” or Jewish influence is funny. …

Fortunately, out of the goodness of her heart, Ms. Rosenberg has a plan for how Noah can save his career by making it up to fat people, women, and Jews.

It’s worth remembering that the last time “The Daily Show” was the object of this much criticism, it was back in 2010 when Irin Carmon shined a spotlight on the franchise’s difficult history with female correspondents and women writers. …

At some point, he’ll have to answer to critics of those tweets and explain how he has grown as both a comedian and as the progressive political thinker he claims to be. When he does, he should pair that narrative with real action, explaining what kind of writers and correspondents he wants to surround himself with and what he hopes to learn from them. If Noah’s big selling point is that he offers a fresh perspective to the audience for “The Daily Show,” then he should demonstrate that he values the same thing in his own staff.

Hiring more women and people of color on “The Daily Show” probably won’t satisfy everyone who’s angry at Noah today and who is hitching up the bar he’ll have to clear to be a success at his new job. But more than taking back some lame jokes, it would be a substantive step toward making “The Daily Show” embody its own values.

An especially underrepresented group in the media from whom Noah should definitely hire to write for The Daily Show is women of Jewishness, such as, to take a random example, Alyssa Rosenberg, who blogs about pop culture for The Washington Post’s Opinions section.

By the way, commenter Cattle Guard suggests this bumper sticker for Ms. Rosenberg.