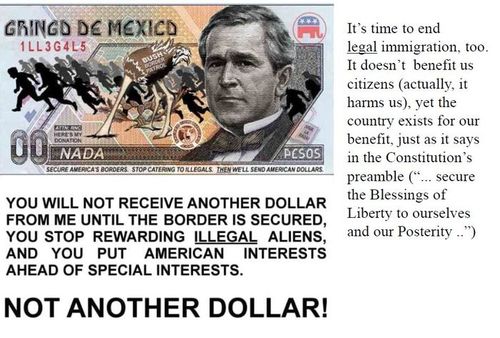 Here's an armchair-guerrilla activity I've suggested before to VDARE.com readers: Use the postage-page envelopes typically provided with the major parties' fundraising letters to send them tokens of your immigration-related disgust.

Judging by my mail, the begging is at low ebb currently, but there is a trickle.  I mostly receive these appeals from Republican organizations, and a few weeks ago a "2015 Leadership Survey" — how exciting! — arrived from the "Friends of John Boehner."  It even includes a "registration number"!  (Wowser.)

Of course, it's never worth wasting effort or ink on these fraudulent "surveys" or "polls" — these mailings are strictly about money.

(This one does include, as Question #14 out of 16, "Should securing the border and enforcing our laws be critical first steps in reforming immigration policy?"  If this were 1999, I'd be excited that such a question was included.  But I'm 15 years older now ...)

So this one is going back to House Speaker Boehner's buddies without even a penny but with a copy of the adjacent "peso note" as my token of immigration-driven disgust  You'll find a 260-kB PDF to print your own here.

That PDF, economically, has two of the peso notes on one 8.5" x 11" page, portrait-oriented, and if you recycle paper that's already been used on one side, your paper costs in printing these will be zero.

The PDF also includes a bonus note to the side about ending legal immigration, something I've added since the last time I suggested this activity.

There's a Democratic version, too, and its 350-kB PDF is here.  It has the same two-for-one and bonus-message features.

Interestingly, the envelope for the 'friends-of-Boehner' version I'll soon be mailing includes space for one's return address — weird, since the envelope is pre-addressed and postage-paid, so there's no way it would come back to me.  Also, there are boxes to check off for "Leadership Survey Enclosed" and "Contribution to Friends of John Boehner Enclosed."  So I filled each of those in, under the assumption that they'll think someone invested enough to do all that will also be enclosing a fat check.  Psych out!

According to the website of CBS's 60 Minutes, Scott Pelley interviewed Boehner for Sunday's show and the following exchange was part of the broadcast:

PELLEY: Mr. Speaker, can you bring the Tea Party in line? There are Tea Party groups that hold fundraisers under the heading of, "Let's fire the Speaker." They don't think you're very conservative.

BOEHNER: Well my voting record is as conservative as anybody here. The issue with the Tea Party isn't one of— strategy. It's not one of different vision. It's— it's a disagreement over tactics, from time to time. Frankly, a lot is being driven by national groups here in Washington who have raised money and just beating the dickens out of me.

I recall (spoof) signs posted on office doors around the big aerospace company where I used to work that said, "The beatings will continue until morale improves."  In our case, may His Eloquence's beatings continue until he has a patriotism implant.

If legions of VDARE.com readers will step up on this — crude as it is — when their opportunities arise (it's easy and free, except for a bit of printer ink or toner), it can only raise the level of the (perpetually dismal) national conversation on immigration.