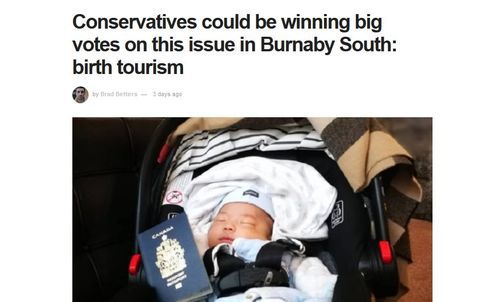 Anchor Babies In Canada Could Be Winning Votes For Canadian Conservatives

The United States and Canada are the only First World countries to have automatic birthright citizenship. It's an insane policy and both of our countries should end it.

It now may become an issue in Canada. From The Post Millenial:

Watching the third and final debate for the upcoming Burnaby South [British Colombia] byelection this past Monday, I was struck by how much throughout this race I’ve heard candidates discuss the issue of immigration without mentioning a particular incensing form of immigration abuse that’s so rampant in the region: birth tourism.

Besides the debates, I’ve seen nothing in candidates’ literature regarding their plans to close this loophole. Our own MP and even the New York Times have complained about the abuse; why haven’t these candidates addressed the issue?

Foreign tourists coming into Canada in order to have birth and secure citizenship for their child is enabled by our centuries-old policy of ‘birthright citizenship.’ It can be found nowhere else in the developed world, barring the US. The last developed part of the planet to ban the practice was Hong Kong in 2012; It should be banned here also.
Conservatives could be winning big votes on this issue in Burnaby South: birth citizenship
Brad Betters, The Post Millenial, February 22, 2019

Betters is right,  it should be banned in Canada and in the United States.

It's become a big business.

The report profiled dozens of so-called “baby houses” operating near hospitals throughout the area, each of them charging mainland tourists thousands of dollars so they can take advantage of this loophole at the expense of the B.C. taxpayer.

In one case the Times profiled, the unpaid expenses related to just one birthright-citizenship delivery cost a regional hospital (and B.C. taxpayers) one million dollars–what Hong Kong’s South China Morning Post dubbed the case of the ‘million-dollar baby.’

There have been some attempts to change it.

When the Conservatives introduced an intra-party resolution to end the practice last year (following a similar move from Richmond’s own Conservative MP, Alice Wong), they were accused by Burnaby South NDP candidate Jagmeet Singh of covertly trying to create an atmosphere of ‘division and hate‘–as if any criticism of an issue involving the abuse of our immigration system is somehow based on hatred.

As in the United States, the policy has its defenders.

Gerald Butts, the now-former principal secretary for the prime minister, added to the smokescreen characterizing the resolution as a surreptitious attempt to ‘strip people born in Canada of Canadian citizenship’ and to ‘leave stateless Somali refugees helpless’; accusations which say more about Butts’ grasp on reality than they do about the ambit of the resolution.

The NDP and Liberals’ positions on this issue is clear–they wish to use it as a political tool and a moral cudgel. But what about Burnaby South’s Conservative candidate, Jay Shin? Surely, he could have pushed his party’s supposedly strong position on this.

A "political tool and a moral cudgel"—good description.

The Irish, British, New Zealand, and Australian governments also once had automatic citizenship policies, however, they all ended it years back in response to growing public anger. Meanwhile, no other European or Asian nation, again, including Hong Kong, has such a system.

See my previous article Birthright Citizenship—How Some Other Countries Handle It .

Certainly, Shin could have raised these facts defensively against any of the NDP’s and the Liberals’ nakedly political accusations of racial demagoguery. He could’ve even raised offensively, as a way to embarrass them; all the while responding to voters’ anger over the abuse (which according to the Times piece is huge).

He could have also forced Jagmeet to admit that the practice is, at least, outdated. After all, it’s simply a hangover from the imperial days when those born in the British Commonwealth were considered “subjects” of the British Crown. How could such a practice carry on in today’s era of easy and modern travel?

As was described in the Times piece, B.C. baby houses have offices operating in China, they’re openly advertising their services on Chinese websites, and, the abusers can easily zip in and out of Vancouver airport due to the ease of modern travel; all with the intention of diverting our hospital resources and the future resources of our schools and universities.

The Times piece profiled a diverse array of Vancouver Metro resident who were incensed by this practice. From multi-generational natives to foreign-born citizens who, unlike the children of birth tourists, patiently waited in line to come here.

If the Conservatives were willing to stand up to the NDP and Liberals’ assured intimidation and shout-downs, it could have been an important vote-winner for Shin.