A white woman seen in a viral video pointing a gun at a Black woman and her daughters in a Chipotle parking lot in Orion Township, Michigan, has been arrested on a felony assault charge. Her husband is also facing the same charge:

One Twitter commenter describes it from another point of view:

White woman ALLEGEDLY bumps into black teen. Black teen calls her racist, her black mom then harasses the white couple for several minutes/threatens to beat their ass, they try to drive away, black woman follows then hits their car, white woman then gets out of car and pulls gun.

Different parts of the video show blacks harassing and threatening the white woman, who apparently tried to drive away.
Then the black woman started to bang on the back window of the car.

As the altercation continues, the woman says from the passenger seat of the car: 'You can't just walk around calling white people racist. This is not that type of world. White people aren't racist, no one is racist.'

As Hill continues to ask the woman why she bumped her daughter, she responds: 'I care about you and I'm sorry if you've had an incident where someone has made you feel like that.'

The car window is wound up and the pair go to drive away.

Hill is then seen behind the car and appears to punch the vehicle's back window. It is unclear from the video how Hill came to be behind the car.

According to Hill, she thought the driver of the car was attempting to hit them so she knocked on the back window of his SUV to stop him.

The pair then emerge from the vehicle and the woman points a gun at her.

White woman who was filmed pulling a gun on a black woman in a restaurant parking lot 'after they bumped into her' is arrested along with her husband and charged with assault, Daily Mail, July 3, 2020

Heavy.com has quotes from now from the black woman, who seems to be dangerous, low-class, and a hater of whites:

As the car backs up, Hill hits the back window as she worried he was going to hit her, she told The Detroit News. At that point, the woman jumped out of the car with a firearm and tells Hill and her daughter to, “Get away,” “Get the f*** back” and to “Back the f*** up.” Hill yells off-camera for someone to call the police. Hill also says,” She’s got the gun on me. She was about to hit me with the car. This is crazy! Trump [is] making it real comfortable.”

The Detroit News reports that the Oakland County Sheriff’s Office was called to the scene and that the woman was taken into custody. A photo on Takelia Hill’s Facebook page shows a woman who is looks like the woman in the video being led away by a sheriff’s deputy.

Makay Smith later wrote on her Twitter page saying that the woman in the video was taken into custody. Smith later said that the woman was “let go” but that the police took her guns away. Makay Smith went on, “They said they couldn’t arrest her because my niece mother hit there car (with her hand ) to stop them from hitting my niece!!! Justice needs to be served! This is white privilege.”

The bit quoted above by Heavy.com with insert in brackets, "Trump [is] making it real comfortable," is a way of euphemizing the speech patterns of the black underclass.
Anyhow, the local police didn't want to make an arrest because  the pounding on the car window ("my niece mother hit there car") looked like an assault, but after "investigation," which I assume means misinterpreting Internet video, they decided to lay felony charges against Jillian and Eric Wuestenberg.
It was announced by Oakland County Prosecutor Jessica Cooper (who looks like a Nice White Lady) that the two would be charged with "felonious assault." Oh, and Eric Wuestenberg has been fired from Oakland University, where he was Coordinator of Veterans Support Services. Note the "missing man"-like blank space in Veterans Service page below: 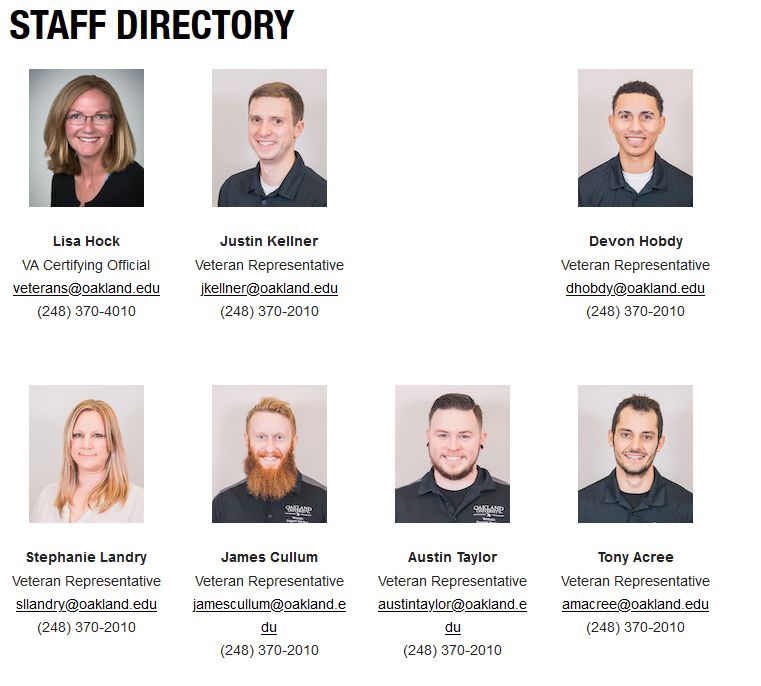 Email the President of Oakland University and ask why.