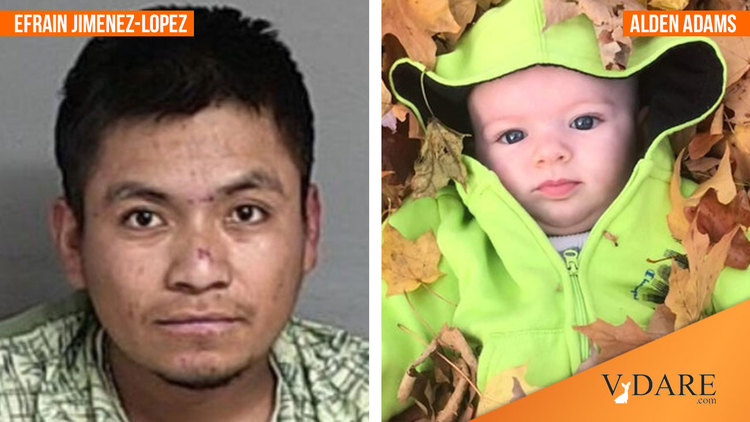 More than a few Americans would like to know how many more children must die at the hands of illegal aliens before Traitor Joe Biden and his Homeland Security Secretary, unindicted Cuban-Jewish visa fraudster Alejandro Mayorkas, secure the southwest border. One of them might be Samantha Adams. Efrain Jimenez-Lopez, a 24-year-old previously reported Mexican, is charged with killing her 6-month-old son, Alden, in the usual drunk-driving wreck.

Efrain Jimenez-Lopez is accused of drunk driving and crashing into the car of a mother and a 6-month-old boy.https://t.co/Bo88wuckPq

Jimenez-Lopez, 24, was charged with failure to stop at the scene of an accident-causing death, operating under the influence causing death, and driving with a suspended license in the Nov. 1 fatal crash that killed 6-month-old Alden Adams.

[Man charged in drunk driving death of Mendon infant heads to trial, by Samantha May and Mike Krafcik, WWMT.com, November 15, 2022]

The drunk Mexican, Michigan police allege, rear-ended the Adams’ minivan, then fled the scene and hid in a cornfield. Unsurprisingly, he didn’t have a valid driver’s license.

Now, to his immigration status:

Jimenez-Lopez was removed from the United States on an expedited order Feb. 20, 2019, after he encountered a border patrol agent in Calexico, Calif. one day earlier, according to an ICE spokesperson.

Jimenez-Lopez re-entered the United States at an unknown date and location without inspection by an immigration official, according to ICE.

ICE has placed a detainer on him.

Even if Jimenez-Lopez had been caught when he illegally re-entered the country, he might have been illegally released, just like more than 1 million other illegals since Traitor Joe took office.

Noting that little Alden would be alive if Jimenez-Lopez weren’t in the country is hardly necessary.

Traitor Joe and his communist sidekick Mayorkas know that. They don’t care. Kids like Alden Adams must be sacrificed for The Great Replacement.