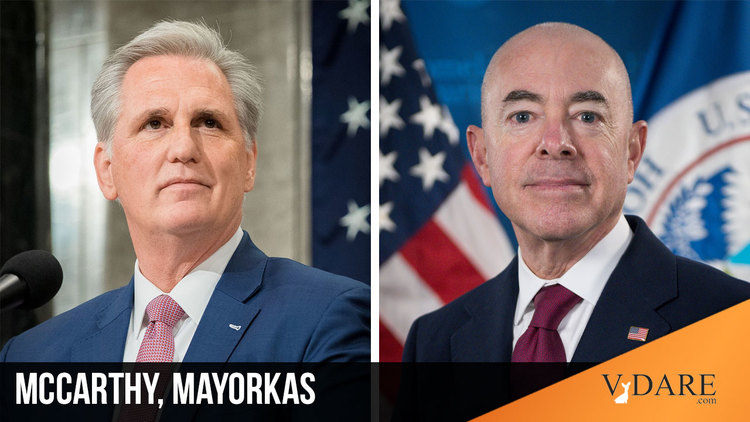 Impeachment Is Back: Kevin McCarthy Threatens To Impeach Mayorkas, If He Doesn't Resign, But Why Not Biden/Harris?

Kevin McCarthy is acting like he's grown a pair—although acting may be the operative word:

House Republican Leader Kevin McCarthy on Tuesday called for Homeland Security Secretary Alejandro Mayorkas to resign over his handling of the migrant crisis at the southern border – or potentially face an impeachment inquiry when Republicans take control of the House next year.

His actions have produced the great wave of illegal immigration in recorded history," McCarthy said at a press conference in El Paso, Texas during a tour of the southern border. "This is why today I am calling on the secretary to resign."

"He cannot and must not remain in that position," he said. "If Secretary Mayorkas does not resign, House Republicans will investigate every order, every action and every failure to determine whether we can begin an impeachment inquiry."

McCarthy said that he had spoken to Reps. Jim Jordan and James Comer, the ranking Republicans of the Judiciary and Oversight Committees, and said they have his complete support to investigate the "collapse" of the border.

Good stuff, and something we here at VDARE.com have been advocating for years, but why not impeach both Biden and Harris? Mayorkas is following their orders. And why didn't he and the rest of the GOP Establishment run on this issue, and produce something more than a Red Trickle?

In a speech in January of this year, Peter Brimelow pointed out that if Biden and Harris were impeached and removed, that would make Kevin McCarthy himself President:

This could be on the technical issue—the Biden Regime is not enforcing immigration law—or they could just flat out say that it’s treason. There are Supreme Court decisions that treason doesn't literally have to mean levying war.

The beauty of impeaching and convicting both of them is that the new Speaker of the House, presumably Kevin McCarthy, would then become president. (I'm not going to think about President Trump becoming Speaker!)

Of course, people will say: we’ll never get 60 senators to vote for that. Well, my position is: let's try it and see! Let's see how these Democrats in marginal states want to defend what Biden has done on the border!

Most American still just don't realize how bad the immigration situation is—how crazy the Democrats are.

You know, there were recently votes on this Build Back Better thing, which includes an Amnesty. Republicans on the Judiciary Committee tried to at least put some bounds on it [FY 2022 Reconciliation: A Pathway to Amnesty]. They say, well, maybe we shouldn't Amnesty people who are convicted child molesters. Democrats wouldn't go for that. They said, what about people who had nine or more convictions for drunk driving? The Democrats wouldn't go for that either.

The process of impeachment will show how nuts they are.