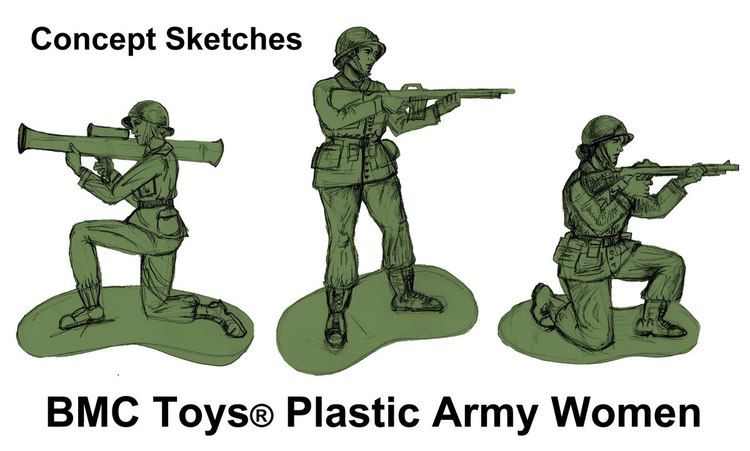 The Lady Wargamer And The Little Green Army Women I Run War Games. Too Often, I Am the Only Woman in the Room.

I looked over the green plastic soldiers I held in the palm of my hand as my colleagues debated whether one figure should represent a battalion or a brigade. As I placed a single figure on the board, I was conscious of the fact that it wasn’t just a piece of plastic and that the discussion over what it represented wasn’t mere talk. Instead, what we were debating was whether we would put 400 or 4,000 men and women along the border of the Demilitarized Zone on the Korean Peninsula to potentially face combat. The outcome of that debate would in turn determine how people playing the game — whether they were uniformed military or high-school-age girls — would think about how a potential future conflict between North Korea and the Republic of Korea and the United States could play out.

When I tell people that I’m a war gamer, I’m either met with blank stares or overly enthusiastic questions about what it is like to play Call of Duty or Risk for a living.

No, dummy, she plays with little green army men for a hobby. Some people like to do that for fun, although 99% of them are male and generally under 13 years old. Generally, women have less silly hobbies, but it takes all kinds. Some women aren’t stereotypical, you know.

In reality, war gaming for the Department of Defense is more than a board game or a computer model. A war game is an analytic or educational game that simulates war and creates a synthetic experience for players to consider different responses to a crisis and to see the consequences of those choices. The goal is to fight wars in a “safe” environment without real weapons or people, often to gain insight into a specific policy question.

As a game designer and facilitator, I have to create a believable environment and tell a compelling story that makes the players — usually United States military and government officials — take the game seriously, believe that their decisions have repercussions and play hard so that the results simulate the real world.

Wait a minute … She’s not playing with little green army men for fun, she’s getting paid to do it. It’s a sensible career for her.

Becca Wasser is a senior policy analyst at the nonprofit, nonpartisan RAND Corporation.

… But there is something else dictating the available choices in war gaming, and that is a lack of gender diversity. War gaming — as with war more generally — has long been a male domain and has significant barriers to entry, retention and advancement. You can’t learn by reading; you have to learn by doing. Many women — myself included — find themselves doing managerial or administrative work for games in a bid to break into the field and learn about war game design and execution, but they often find themselves stuck in that track. I didn’t grow up playing Axis & Allies or memorizing all the fighter aircraft flown by the United States Air Force, like some of my male colleagues did. These are the sorts of things that started me at a disadvantage. Everything about war gaming and military operations more broadly I have learned as an adult, from scratch, whereas most of my male counterparts have been inadvertently training for this job since they were children. Even now, 10 years into my career, I am still playing catch up.

This sense of disadvantage tends to discourage women from joining war gaming teams—let alone the national-security field—because many feel that there is not a clear substantive role for them to play or a path to advancement.

In other words, there are whole bunches of guys out there who have been obsessing over war tactics and strategies since they were six, and the government could get the benefit of all their enormous investment in the subject at low cost ot the taxpayers, but THAT WOULD BE WRONG. Instead, the taxpayers should pay for more grown women to try to get up to speed on this arcane subject on the job.

Because Diversity, that’s why.

What percentage of op-eds in the New York Times consist of careerists offering Identity Politics rationalizations for why they should get promotions and make more money?

By the way, as befits a Rand Corporation analyst, Becca Wasser is smarter than the average Let’s-talk-about-my-hair op-edster.

Girl’s message for equality received in a big way: Green Army women figurines are on the way
By: J.D. Simkins   September 5

Just weeks after stories swirled about a complaint letter penned by an unsatisfied 6-year-old girl from Arkansas in response to a glaring lack of green Army women figurines, one toy maker is officially doing something about it.

BMC Toys, one of three companies to receive letters from young Vivian Lord — and the only to respond — has begun producing women figurines to be included in the iconic toy set that dates back to the 1930s.

You might almost think that there isn’t a big market for Little Green Army Women. Here we are 50 years into the Feminist Era, and one company has some concept sketches …