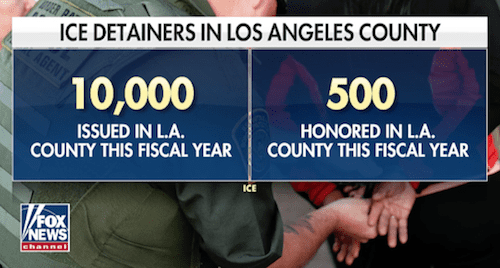 The United States is supposed to be a “nation of laws” but widespread sanctuary jurisdictions show that idea to be a lie.

California is arguably the worst, as a sanctuary state that has had many crimes committed by illegal aliens against US citizens — deaths like three members of the Bologna family, 32-year-old Kate Steinle, Officer Ronil Singh, and Sacramento County Deputy Danny Oliver and Placer County Detective Michael David Davis Jr., among many others. With so many preventable deaths, you might think that California would pay more attention to public safety, but Sacramento prefers diverse criminals to law-abiding citizens.

See ICE’s web page showing the dangerous men released onto American streets by irresponsible local governments — below is a sampling: 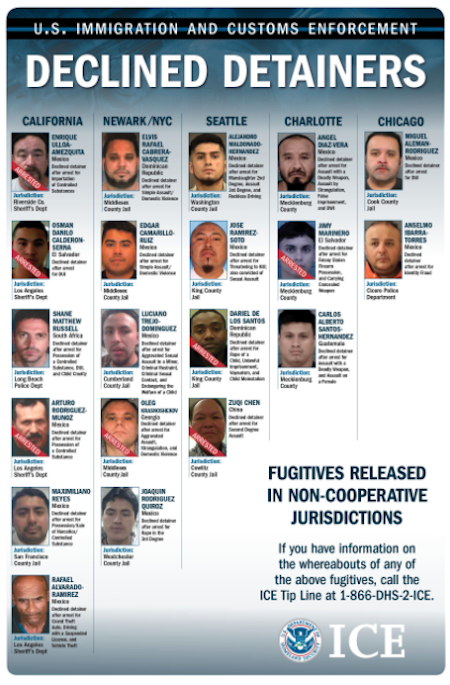 Fox News reporter Griff Jenkins recently investigated the difficulty ICE agents face in Los Angeles, where the deck is strongly stacked against law enforcement in a sanctuary county in a sanctuary state. Officers are forced by the policy to search for criminals rather than simply pick them up at jails just prior to their release. 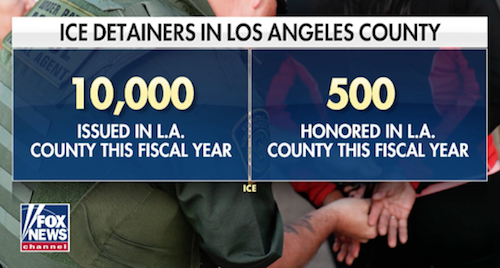 “If you had a criminal warrant from a judge on a specific person, you could go forcibly in, but ICE cannot. They’re abiding by the law,” Jenkins explained Thursday on “Fox & Friends.”

At one stop, ICE agents could see the suspect inside, but could not forcibly enter, having to wait for the owner of the property to allow them inside.

“[It] speaks to the difficulty that ICE has in trying to make these apprehensions,” Jenkins said.

An ICE agent told Jenkins that the criminal alien had been convicted of multiple crimes and had a detainer placed on him on August 9, though it was not honored by local law enforcement and he was released.

“It’s been extremely disappointing to us in federal law enforcement,” the ICE agent said. (Continues)