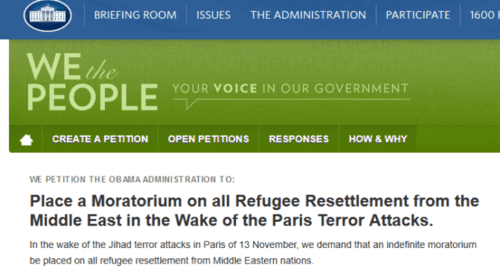 "Americans Are Simply Afraid"—But Not VDARE.com! On The Failure Of The White House Anti-"Refugees" Petition Drive

According to Rasmussen polling (Voters Like Trump’s Proposed Muslim Ban, December 10, 2015), a 46-percent plurality of likely voters surveyed by telephone on December 8 and 9 "favor a temporary ban on all Muslims entering the United States until the federal government improves its ability to screen out potential terrorists from coming here."  Among Republicans surveyed, a landslide majority (66 percent) favor the ban.

However, despite this natural constituency plus its steady promotion here at VDARE.com, an official White House petition demanding a moratorium on resettlement of "refugees" from the Middle East failed to gain the needed 100,000 signatures during the month it was live, November 14 through December 14—at its close, it had garnered only 12,787 signatures.  After attracting nearly five thousand signatures in its first three days—an insufficient, but not utterly dismal, rate—only about eight thousand were added in the following 27 days.

(By "official White House petition," I mean an online petition at the "We the People" website established by this administration as a formal channel for the American people to "petition the Government for a redress of grievances," in the words of the U.S. Constitution's First Amendment.  Petitions that attract at least 100,000 [electronic] "signatures" within the allotted 30 days are supposed to spur at least some response from the administration.  For example, a petition demanding "justice" in the death of Ferguson, Missouri's most famous son, Michael ["Gentle Giant"] Brown—by railroading police officer Darren Wilson—apparently met the signature threshold, thus earning a loquacious reply.)

It's doubtful that, had the resettlement-moratorium petition attracted the needed signatures, it would have yielded a satisfactory response from Obama's lawless administration.  Still, putting them on the spot would have been useful and, perhaps, newsworthy.

And the petition's failure looks bad: If it's true, per Rasmussen, that 46 percent of voters favor a temporary ban on the importation of MidEast "refugees," that amounts to tens of millions of citizens.  Yet a petition to that effect couldn't attract a lousy hundred-thousand signatories?!?!

(In heartening contrast, a White House petition calling for the resettlement, during Fiscal year 2016, of "at least 10,000" Syrian "refugees" closed on December 17 with a pathetic 1,378 signatures.  So there's that!)

Meanwhile, an online petition with a similar anti-"refugee" theme directed to Canada's new, boy-wonder prime minister has gained nearly 46,000 signatures, even though Canada's population is only 11 percent that of the U.S.!  It's not clear how long this Canadian petition has been open for signatures, but Justin Trudeau assumed office only on November 4, so it can't have been drastically longer than American immigration patriots' failed petition.

(Note, though, that the organization Care2 hosting the Canadian petition isn't part of a government, and it isn't even based in Canada.  Further, signers of the Canadian petition can limit the public evidence of their having signed to the name of their province, whereas with the White House petition, a signer's initials, city, and state are always displayed.)

Then why this disheartening damp squib?  I suggest:

Regarding getting the word out, readers here at VDARE.com were urged over the month—principally by Patrick Cleburne, by Peter Brimelow, and by me—to take a minute and go sign the damn petition.  (These entreaties to readers were all after the petition had been launched; we had nothing to do with initiating it.)

I tried some other avenues, too.  The first was an email to the list, about 200 names, associated with Montanans for Immigration Law Enforcement.  That yielded an otherwise-inexplicable spike of about 35 signers from Montana over the next two days, demonstrating that success was in prospect for the petition if enough people knew about it.

But when I urged William Gheen of Americans for Legal Immigration Political Action Committee [ALIPAC] to do the same with his (presumably large) email list, he declined, writing:

We are not going to ask our supporters to sign any petition under the control of the White House because 1. Such petitions will have no impact on Obama's policies and 2. By giving up their identities and emails to their enemies in the White House our supporters would risk having their emails and IDs given to spammer groups and enemy pro illegal alien groups to then bombard with messages contrary to our goals.  Handing your real name and email over to the White House is like handing your car keys to a robber.

And NumbersUSA V.P. Jim Robb told me they'd decided against notifying their enormous email, Facebook, and Twitter audiences for reasons similar to Gheen's:

We know OUR database is secure, and we know exactly how it will and will not be used. We are not so sure about names and email addresses collected on behalf of the Obama White House. ... We do point people to outside resources all the time, but a White House petition is not a natural extension of pointing people to resources we trust.

Still, why couldn't ALIPAC and NumbersUSA at least have alerted their lists to the petition's existence, perhaps limiting their communication to such notification and to the suggestion that their alertees consider signing it.  That way, VDARE.com wouldn't have been an entirely solo trumpet on this, and an outcome useful to the whole patriotic-immigration-reform movement would have been more likely.

What about chicanery (i.e. signature suppression) by the White House?  Peter Brimelow tells me that he and Lydia Brimelow first tried signing the petition using their VDARE.com email address, yet their initials never appeared at the petition's page.  So he tried again, using his private email address, and this succeeded.

But he also heard from two VDARE.com readers, saying that their initials and cities had never shown up.  One of them, writing from Georgia, emailed him on December 14:

I, too, could not successfully sign the petition.  I tried on Nov. 29th and also on Dec. 1st but never saw my initials appear.  Like you, I suspect the White House of rigging the petition.

Apprised of this, I tried signing the petition a second time, using the email address of a pseudonym (yes, a vile offense, civically-speaking!).  Afterward, it took about 90 minutes, but—sure enough—my pseudonym's initials and location did appear. but the initials of Peter's correspondents remained no-shows.  (On the other hand, that email I did to the Montana group had netted a seemingly good return in added signatures.  )

So there's evidence suggesting that the White House has software that semi-randomly ignores signatures on petitions (perhaps only petitions they obviously want to fail).

Finally, what could be called "ideological fear" is clearly abroad in the land and, thus, might be a factor in the shortfall of signatures.  The December 2 Islamic-driven enormity in San Bernardino, for example, demonstrated that some Americans have internalized the rule "If you see something, shut up."

Thus there could have been caution—or outright fear—about this thuggish administration having people's names, city locations, and email addresses, just as William Gheen suggested.  (See The Democrats’ Theme for 2016 Is Totalitarianism, Kevin Williamson's December 21 piece at National Review Online, for a more global view on this.)

The literally fearless Mark Steyn has laid out most clearly where we're headed at this rate.  Spurred by 2006's "bizarre hysterical violence over the Danish cartoons" (Brenda Walker's term for it) and the pusillanimity of Big Western Journalism's response, Steyn wrote:

When that racket starts, no cartoonist or publisher or editor should have to stand alone. The minute there were multimillion-dollar bounties on those cartoonists' heads, The Times of London and Le Monde and The Washington Post and all the rest should have said "this Thursday we're all publishing all the cartoons. If you want to put bounties on all our heads, you better have a great credit line at the Bank of Jihad. If you want to kill us, you'll have to kill us all. ..."

The free world is shuffling into a psychological bondage whose chains are mostly of our own making.

Well, whether it's immigration in the national interest, IQ-realities, the minority-mortgages meltdown, or now anti-"refugee" petitions, VDARE.com has always waded right in to this existential clash-of-civilizations fight.

Give during their current fund-raising drive!