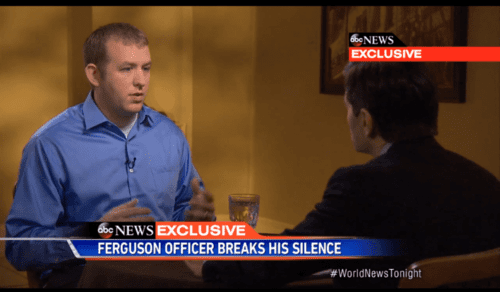 As VDARE.com Editor Peter Brimelow predicted this spring, all it took to change the national conversation about immigration was for one person, in this case Donald Trump, to mention it in one speech.  And now that Ferguson, Missouri appears to be once again sliding into chaos, it’s time for The Donald to do it again—by standing up for law and order. 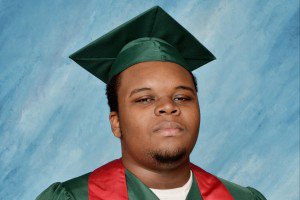 There is already a palpable sense that America is on the brink of breakdown. And the one-year anniversary of the death of The Gentle Giant of Ferguson, the late Michael Brown, proceeded exactly as you would expect:

Guy armed with shotgun to protect the #Ferguson Market. https://t.co/nVt10gAwlv

Remember that name, because (especially if he dies) #TyroneHarris may become the new hashtag that justifies renewed violence in Ferguson.

Even as this is written, St. Louis County officials have declared a State of Emergency and more demonstrations are planned for Monday night [St. Louis County issues State of Emergency, by Joe Millitzer, Fox 2 St. Louis, August 10, 2015]. Before Monday afternoon, 50 protesters had already been arrested [50 arrested in Ferguson protests downtown; state of emergency declared in county, St. Louis Post-Dispatch, August 10, 2015].

These included well known agitators Cornel West, DeRay McKesson, and Johnetta Elzie [Cornel West, Deray McKesson among dozens arrested in St. Louis Protests, by Goldie Taylor, Blue Nation Review, August 10, 2015] Leftist organizers disingenuously claim they want to keep demonstrations “peaceful” But even if we believe them, they have proven they can’t control the forces they have unleashed. Even St. Louis Alderman Antonio French, who has been a vocal supporter of the protests, found his possessions stolen after he tried to give shelter to protesters.

Tonight I let 4 guys run into the #HealSTL office to get away from the gunfire. While I was in the front, they stole laptops and iPads. SMH.

Significantly, while the Main Stream Media shamelessly promotes the protests in Ferguson, there has been almost no mention of the two police officers who have already been murdered since the month began.

The suspect, Grover Cannon, “has an extensive arrest record dating to 2004 with convictions for possession of stolen things, burglary, possession of marijuana, flight from an officer, misdemeanor battery, trespassing, resisting an officer and felony theft.” He also dropped out of school after the 8th grade [Breaking: Grover D. Cannon in custody after daylong manhunt, KTBS 3, August 6, 2015].

LaValley was laid to rest the day this article was written, with hundreds attending [Hundreds turn out for Ofc. Thomas LaValley’s funeral, KTBS 3, August 10, 2015].But in contrast to the burials of Michael Brown or Freddie Gray, the Obama Administration did not send a representative to honor Bolton or LaValley.

Though the MSM all but ignored the story, thousands of flag-waving Americans had lined the streets over the weekend to pay tribute as LaValley’s body was transported home for the funeral [Fallen SPD officer’s escort to S. LA draws thousands paying respects, by Troy Washington, MS News Now, August 8, 2015].

But were they waving the right flag? After all, every police officer in the country now knows if there is an interaction with a black suspect that comes to the attention of the federal government, his or her life will be utterly ruined by the ensuing investigation.

Even in the best case scenario, though Eric (“my people”) Holder’s own Department of Justice finally cleared Officer Darren Wilson in the Mike Brown shooting, Wilson is now “unemployable” for the crime of not allowing himself to be murdered [Darren Wilson: Ferguson made me unemployable, by John Bacon, USA Today, August 4, 2015].

This climate of fear has dangerous consequences. In Alabama, a police officer hesitated after a black man confronted him during a traffic stop. According to the head of the Fraternal Order of Police, the officer feared retribution if he used force against the unarmed man.

As a result, he was pistol whipped and left lying on the ground—while black passerby took pictures, posted them to social networking, and left taunting messages.

The alleged perpetrator was eventually captured, and as you probably have guessed, has a long criminal history including multiple convictions for robbery, assault, and other crimes [‘If the tables were turned… they would be rioting;: cops outraged after photos of bloody, pistol-whipped detective posted online—with support for the attack, by Dave Urbanski, The Blaze, August 9, 2015]

Naturally, the Republican Party has been silent on these developments. Indeed, it has decided now is the perfect time to roll out soft-on-crime policies in the hope that re-enfranchised black felons will vote for the party of tax cuts for the rich.

However, Republican frontrunner Donald Trump had a different take on the issue a few months ago:

Trump has also shown a willingness in the past to discuss the color of crime.

As with immigration, all it would take to change the national conversation on crime and violence is one speech, backed by some courage. Will Donald Trump fill the political vacuum by speaking against anti-police and anti-White violence?

Of course, the political climate being what it is, such a speech might lead to even more threats against the Donald. He’ll have to hire more security. My suggestion: hire Darren Wilson. He needs a job.