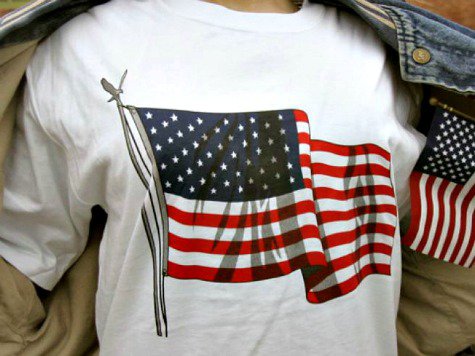 Remember the case of the California high school boys who got into trouble for wearing the American flag on Cinco de Mayo? Their attire was considered an insult and a cause of violence to Mexican-American students. This occurred, mind you, in a U.S. school, on U.S. soil.

On September 17th, Constitution Day (!), "The 9th U.S. Circuit Court of Appeals said...that a majority of its judges voted against rehearing the case." Ninth Circuit Court Won't Reconsider U.S. Flag Shirt Ban at California School By the way, there are 29 judges on that court, and the majority voted not to rehear the case.

The whole thing is indeed an outrage, and a vivid example of how assimilation is (not) working. In fact, the case seems made to order for political candidates to rail against. So where are such candidates?

The case may wind up in the U.S. Supreme Court. According to Breitbart:

Leaving its February unanimous decision untouched, the Ninth U.S. Circuit Court of Appeals refused this week to rehear a case challenging a Northern California high school’s decision to force students to wear T-shirts inside out if they were emblazoned with the American flag on Cinco de Mayo, a holiday celebrating Mexican history and heritage, reports CBS 13 in Sacramento. The case could now head to the U.S. Supreme Court.

The appeals court had ruled that the school had the right to act as it did in order to ensure public safety.

Judge M. Margaret McKeown wrote for the court in February, “Our role is not to second-guess the decision to have a Cinco de Mayo celebration or the precautions put in place to avoid violence...(past events) made it reasonable for school officials to proceed as though the threat of a potentially violent disturbance was real.”

Officials at Live Oak High School, in the San Jose suburb of Morgan Hill, had ordered students wearing the American flag T-shirts on Cinco de Mayo 2010 to turn them inside out. The school had a history of racial tension between whites and Latinos on Cinco de Mayo, according to numerous reports about the incident.

William Becker, an attorney representing the students, said in February that if the appeals court would refuse to rehear the case, he would appeal to the U.S. Supreme Court, saying, “The 9th Circuit upheld the rights of Mexican students celebrating a holiday of another country over U.S. student proudly supporting this country.” 'Cinco de Mayo' Flag Case Could Head to Supreme Court,William Bigelow, Breitbart, September 20, 2014.

Letter
A Talk Radio Listener Says Audubon Societies Can Drop The Name Of The White Audubon Because They Rely On Grants, Not Donations