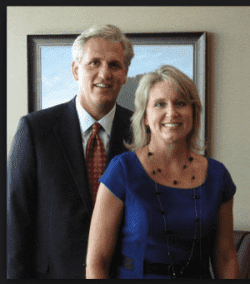 Ellmers and McCarthy: a Power Couple? H/T The Daily Haymaker

In a story which reminds us forcefully about how life Inside The Beltway works gotnews.com reports BREAKING, EXCLUSIVE: DC Sources: “Rep. Kevin McCarthy & Rep. Renee Ellmers Are Having An Affair” January 23 2016

Multiple sources within Bakersfield, North Carolina, & on Capitol Hill tell Gotnews.com that Majority Leader Kevin McCarthy (R-CA) and Renee Ellmers (R-NC) have been carrying on a long-running affair since 2011.

The affair is something of an open secret in Washington, D.C. Reporters at other publications, lobbyists, congressional staffers of both parties all know about it…A lobbyist describes Ellmers as a “social climber who has ingratiated herself” with McCarthy

This could explain a lot about the confident violence with which the Ellmers has spurned her base – and why she was able to so easily raise Treason Lobby money to do so.

For the VDARE.com view of McCarthy please read GOP Whip Kevin McCarthy: A Profile In Treason with factual supplementation from House Leader Kevin McCarthy (Chamber of Commerce-CA) Is A Blessing in Disguise (too cheerful a headline in my opinion).

The ex-newsman who runs North Carolina’s The Daily Haymaker points out in Cyber political hit-man has his sights on Ellmers, McCarthy January 22 2015 that the source here does not have a perfect record – but a commenter documents that the rumors do actually exist.

McCarthy and Ellmers deserve each other.

America deserves far better than either.