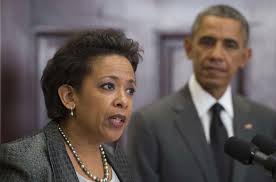 Of course Obama's Attorney General nominee Loretta Lynch should not be confirmed until Obamnesty is rescinded, and the fact that GOP Senate Majority Leader Mitch McConnell was going to let her be voted on at all this week is further evidence of how utterly useless he is.

On Sunday, however, McConnell announced the Senate would not consider Lynch until the human trafficking bill is wrapped up (Loretta Lynch nomination hits another hurdle| The longer her nomination waits, the more time there is for wavering Republicans to break against her, by Seung Min Kim, POLITICO, March 15 2015.).

But McConnell, who has still not yet said how he will vote on Lynch, is not doing this to stop Obamnesty. He is not even doing this to compel the attachment of Senator David Vitter's amendment ending birthright citizenship—the obvious counter to Obamnesty and all future illegal immigration, because it would defang its long-term electoral impact. (Disgracefully, GOP presidential rivals Rand Paul and Ted Cruz both ducked taking a stand on Vitter's idea:  Senate GOP Presidential Contenders Won't Say How They'd Vote on Birthright Citizenship, by Lauren Fox, March 12, 2015).

No, the reason McConnell took this step is that Democrats are trying to strip standard boilerplate anti-abortion provisions out of the trafficking bill.

VDARE.com takes no position on abortion and our writers include fierce partisans of both sides.

But, regardless of what you think of the Right To Lifers, you have to be impressed at their ruthless ability to inject backbone into GOP jellyfish—especially given that their issue polls much worse than immigration reduction.

Immigration Patriots need lessons from them.