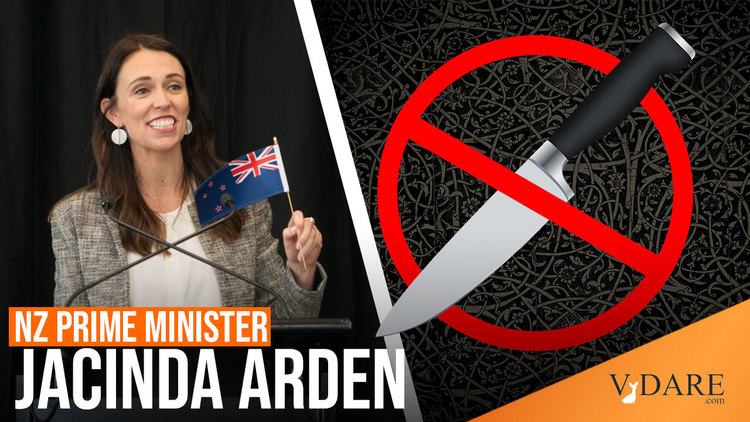 Earlier: New Zealand Stabbing: Whether Muslims Are Victims Or Attackers, Jacinda Ardern Will Find Something Nice To Say About Them

This was an emotional reaction, which is sort of what Ms. Ardern specializes in, as seen by her reaction to a previous terrorist attack in New Zealand, committed by a white man who objected to Muslim immigration like that of the recent mass stabber, where she was able to attack his "faith" and ban guns in New Zealand more than they are already banned.

New Zealand's gun amnesty and buyback program has ended, with more than 56,000 banned firearms and nearly 200,000 illegal gun parts collected since the program began in July, according to police data. https://t.co/OmbcQGQVsb

The thing is, there shouldn't be anything surprising about Sri Lankan attacking New Zealanders—Sri Lanka was, in 2019, the site of one of the largest massacres of Christians in recent history: the 2019 Sri Lanka Easter bombings.

On 21 April 2019, Easter Sunday, three churches in Sri Lanka and three luxury hotels in the commercial capital, Colombo, were targeted in a series of coordinated Islamist terrorist suicide bombings. Later that day, there were smaller explosions at a housing complex in Dematagoda and a guest house in Dehiwala. A total of 267 people were killed, including at least 45 foreign nationals, three police officers, and eight bombers, and at least 500 were injured. The church bombings were carried out during Easter services in Negombo, Batticaloa and Colombo; the hotels that were bombed were the Shangri-La, Cinnamon Grand, Kingsbury and Tropical Inn. According to the State Intelligence Service, a second wave of attacks was planned, but was stopped as a result of government raids.

According to Sri Lankan government officials, all eight of the suicide bombers in the attacks were Sri Lankan citizens associated with National Thowheeth Jama'ath, a local militant Islamist group with suspected foreign ties, previously known for attacks against Buddhists and Sufis.

Now Ms. Ardern's emotions have been aroused, but instead of trying to control mass-murdering Sri Lankans, like this one:

New Zealand’s PM Ardern says her gov't had been trying for years to deport the man who wounded seven people in a knife attack in Auckland https://t.co/odkVxyPuxo pic.twitter.com/uUCF0JQq3n