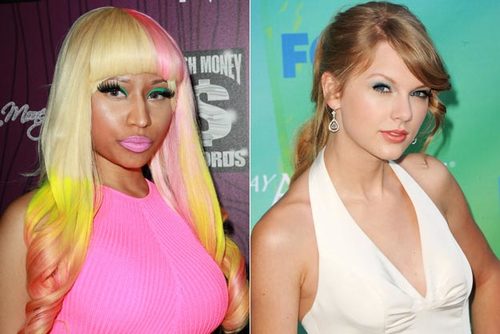 Swift  (the white girl above right) is the reigning queen of American pop culture, who began her career as a wholesome country star but decided it was to her advantage to turn her back on the genre and embrace a more "urban" image. Politically, Swift also declared herself a feminist and started palling around with Hollywood leftists like the horrifying Lena Dunham. [Why Lena Dunham Triggers the American Right, by Gregory Hood, Radix Journal, November 6, 2014]

Swift was nominated several times at the upcoming MTV Video Music Awards, which will be hosted by Miley Cyrus because God hates us. This led to a tantrum by Nicki Minaj (black, above left)who looks like one of the evil Capital residents from the Hunger Games movies but is actually an entertainer of some kind who churns out the prolefeed demanded by the vibrant denizens of Obama's America.

Besides generating product which is best termed "music" only as a kind of parody,  Minaj's chief appeal, insofar as it can be guessed, is her heavily made up and allegedly, uh, "augmented" body, which gives her an appearance more artificial than Bruce Jenner after six surgeries and sixteen hours of photoshop.

Minaj's edifying contribution to fine arts this year was "Anaconda," which, in true hip-hop style, is essentially a tiresome remix of 1992's "Baby Got Back," which itself sampled the beat created in 1986 by the Detroit techno band Channel One. However, the video features Minaj grinding and shaking her posterior, which constitutes a bold attack on institutional racism and patriarchal assumptions. Black Bodies, and all that.

So Minaj was none to happy about Swift receiving nominations when she didn't.

The rapper had a reason to be upset when she was snubbed — and she made her reasoning clear.

"If I was a different 'kind' of artist, Anaconda would be nominated for best choreo and vid of the year as well," said Minaj.

"Black women influence pop culture so much but are rarely rewarded for it."

She then tweeted: "If your video celebrates women with very slim bodies, you will be nominated for vid of the year."

I thought this was "body shaming" but I guess not.

Anyway, Swift tried to make an appeal to feminist solidarity.

That's when Taylor Swift — who describes herself as a feminist — jumped in, apparently taking the tweets personally.

"I've done nothing but love & support you. It's unlike you to pit women against each other. Maybe one of the men took your slot," she wrote.

It was a surprisingly barbed volley from a singer known for her meticulously crafted public image — even Nicki Minaj seemed taken aback. "Didn't say a word about u," she replied.

The rapper then retweeted a supporter who accused Taylor Swift of not being "critical of racist media."

This provided an opening for the various rent seeking Social Justice Warriors to leap into the fray and begin another one sided "conversation" about "white feminism" and the dangers of using the anger of a black woman to stereotype about, well, "angry black women."

For many users, Swift and Minaj's interaction reflected an all-too-familiar dynamic: A black woman makes a point, and a white woman tells her to simmer down or hijacks the conversation in the name of feminism.

And what was her point? As usual, "give me that."

Perhaps awards shows should simply follow the model of college debate tournaments. The sport of debate has essentially been abolished because African-American teams found it was a successful tactic to simply Mau-Mau the judges, ignore the topic they are supposed to be discussing, call everyone racist, and demand an award. This they dutifully receive.

And they win, because few white judges dare vote publicly against blacks acting stupid. (The secret ballot is an underrated thing.) That would be like admitting you read The Bell Curve.

So let's just do this for award shows. Make it a big hugbox and give every millionaire "victim" who shows up a trophy appropriately shiny enough to double as bling.

After all, hip-hop is the most corporate, consumerist, and capitalist genre out there. As autotuned mediocrity Rihanna put it, "Bitch Better Have My Money." Let Minaj, Azealia Banks, and the rest feel better about themselves.

As for Swift, let's hope she learned a valuable lesson about Cisgendered White People trying to dabble in multicultural progressivism. Don't even try it. You're still a racist.

Social Justice Warrior signaling? Not Even Once.

However, though I wish you well, I'm not among them. Like all real Men of the Right, I listen to metal.