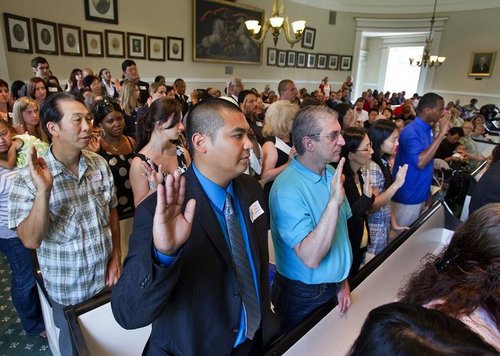 The Death Of Duty: New Citizens Don't Have To Pledge To Defend The USA

In the distant recesses of memory, some of our older readers may remember a time when the grant of American citizenship was seen as both a privilege and a duty. New citizens took a solemn oath not just to obey the laws of the land, but to defend their new country.

Now of course, citizenship is a legalistic tool used by an occupying government to wage a war of dispossession against actual Americans. And in Obama's America, you don't even have to bother with the pretense of having any sense of obligation to the United States.

U.S. Citizenship and Immigration Services on Tuesday said it will no longer require incoming U.S. citizens to pledge that they will "bear arms on behalf of the United States" or "perform noncombatant service" in the Armed Forces as part of the naturalization process.

Those lines are in the Oath of Allegiance that people recite as they become U.S. citizens. But USCIS said people "may" be able to exclude those phrases for reasons related to religion or if they have a conscientious objection.

USCIS said people with certain religious training or with a "deeply held moral or ethical code" may not have to say the phrases as they are naturalized.

The agency said people don't have to belong to a specific church or religion to use this exemption, and may attest to U.S. officials administering the oath that they have these beliefs.

[Obama: New citizens can skip pledge to take up arms and defend the U.S. by Pete Kasperowicz, Washington Examiner, July 21, 2015]

Of course, a "deeply held moral or ethical code" can mean anything. One obvious example which springs to mind is new "refugees" being imported from the Middle East refusing to take up arms for the United States if it means fighting fellow Muslims.