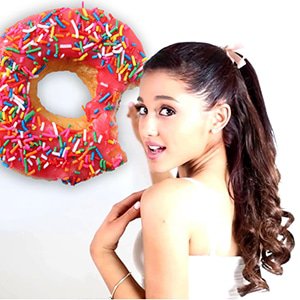 There's a regular feature in grocery gossip magazines titled "Stars: They're just like us!" Supposedly "candid" photos show actors and starlets taking out the trash, dropping off their kids at school and walking their dogs to emphasize their Everyday Peoplehood.

But we all know it's another manufactured Tinseltown myth. Routine outbreaks of celebrity tantrum-itis remind us that the denizens of the entertainment world are a spoiled bratty species unto themselves.

Take pop diva Ariana Grande. This week, the wide-eyed tartlet got caught profanely bashing our country, mocking cashiers and spreading her precious spit on donuts for sale at a Lake Elsinore, Calif., shop.

Surveillance video exposed Miss Thang's contempt for the working class, contempt for private property and contempt for public health. Her fake apology displayed childish disregard for her fan base's comprehension skills. "I am EXTREMELY proud to be an American and I've always made it clear that I love my country," she wheedled—after griping in plain English: "I hate Americans. I hate America!"

In response to critics who pointed out that her donut vandalism violated her grandiose proclamations of "eating a full plant-based, whole food diet that can expand your life length and make you an all-around happier person," she blamed her obnoxious behavior on being "upset" by Americans who overeat.

The 22-year-old singer argued that she wasn't being a hypocrite. She was actually protesting "childhood obesity," you see, by opening up her big, fat lip-glossed mouth and stuffing it with fried confections. The notoriously demanding prima donna, who has a history of red carpet hissy fits and meet-and-greet meltdowns, hilariously tried to turn her pastry petulance into a public service announcement.

"We need to demand more from our food industry," she preached. "However I should have known better in how I expressed myself; and with my new responsibility to others as a public figure I will strive to be better."

It's "do as I say, not as I do" dressed up in a concern troll costume.

You will not be surprised to learn that her manager is one Scooter Braun, the same impresario responsible for launching jackanapes Justin Bieber, the former pop star who spends more time spitting, stripping and pissing in public than he does singing and dancing anymore. Bieber doesn't need Braun. He needs Nanny 911.

But I don't mean to single out these post-millennial Bratz dolls. Fame corrupts at all ages, shapes and sizes. Just this past month:

Celebrity hellions are overgrown babies whose insatiable egos need to go on a crash diet ASAP. I agree with whiny warbler Ariana Grande about one thing: American overconsumption of Hollywood's pop rot and schlock is bad for the country. Parents, save some money and skip the Ariana Grande concert tickets. Take your kids on a guilt-free trip to your local donut shop instead.