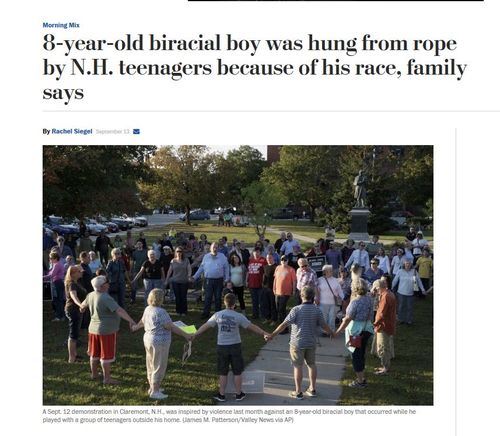 According to The Valley News,

The boy’s grandmother, Lorrie Slattery, said her grandson and a group of teenagers were playing in a yard in their neighborhood around 5 p.m. on Aug. 28 when the teens started calling the boy racial epithets and throwing sticks and rocks at his legs.

The situation escalated when some or all of the teens stepped up on a picnic table and grabbed a nearby rope that had been part of a tire swing, Slattery said.

“The (teenagers) said, ‘Look at this,’ supposedly putting the rope around their necks,” Slattery said. “One boy said to (her grandson), ‘Let’s do this,’ and then pushed him off the picnic table and hung him.”

But, the newspaper reported, the grandmother also admits this key fact:

“[N]o adults witnessed what happened, so she and others have been forced to piece events together from accounts of the children who were there. Among those in the backyard at the time was the boy’s 11-year-old sister, who went and found their mother, Cassandra Merlin, shortly after the incident.

Now, “activists” are upset, the newspaper reported, because, as the headline put it, Claremont Police Still Mum About Boy’s Injuries.”

Ten days after the incident, aside from confirming an ongoing investigation, police have refused to release any details about the case, citing the confidentiality that protects juvenile proceedings.

But Twin State activists involved with racial justice issues said that by not offering any information about the case, officials could be stifling an important community conversation about racism.

Does anyone believe the cops would stay silent if they possessed the evidence that teenage racists attempted a lynching? Typically, details about such cases are released; names aren’t. Shield laws and policies usually forbid police from releasing juvenile names, not the basic facts of the crime.

And are we really to believe that teenagers in 2017 New Hampshire, after at least seven years in public schools and relentless propaganda about Martin Luther King and Black History Month, are lynching biracial children because they are biracial?

Photos show that something happened to the boy. Whether it was a “lynching” because he is biracial remains to be seen.

I could be wrong, but this has “hoax” written all over it.

The latest story, illustrated above is this:

He suffered an unspeakable trauma — one that could haunt him long after the rope burns around his neck begin to fade, his worried relatives say.

Now two weeks after 8-year-old Quincy Merlin was allegedly taunted with racial slurs by a group of white teens and pushed off a picnic table with a rope around his neck, his New Hampshire family wants to move away.

They also want to get the biracial boy into intensive therapy.

Quincy’s mom Cassandra Merlin authorized a GoFundMe online fund-raiser that collected nearly $43,000 of a $55,000 goal as of late Saturday — for counseling, relocation and other costs.[More]

It all sounds very familiar.