"A Lot Of Black Women Fell For Barack Obama The Moment They Saw His Wife."

Vanessa Williams writes in the Washington Post's "Root" magazine (I'm guessing the author is a different Vanessa Williams than this former Miss America, singer, and actress):

Gotta love the brothers who show their affection for the dark-skinned girls, even if they are hollering out the window of a passing car.

Gotta love it even more when the brother is the president, and the object of his affection is front and center for the world to see.

It’s true: A lot of black women fell for Barack Obama the moment they saw his wife.

If a black president represents change, a dark-skinned first lady is straight-up revolutionary.

I won’t apologize for taking note of Michelle Obama’s physical appearance. Plenty has already been said about how she, with her double Ivy degrees, six-figure salaries and two adorable daughters, is crushing the image of the struggling black single mother. She is a real life Clair Huxtable! But the true breakthrough here is that sisters who look like Michelle Obama seldom become cultural icons, aesthetic trendsetters–a proxy for the all-American woman.

And don’t roll your eyes and ask why we have to go there; we haven’t completely gotten over our prejudices about skin tone and hair texture. Despite years of scholarly, literary and popular debate–from Dr. Kenneth Clark’s baby-doll tests, to Toni Morrison’s tragic characters in The Bluest Eye, to the showdown between [racial term that doesn't appear in iSteve] in Spike Lee’s School Daze–too many of us continue to accept a standard of beauty that does not favor ebony-hued skin, woolly hair and full lips (and not those surgically enhanced smackers, either).

I know from first-hand experience. I remember being taunted and shunned by some people who didn’t believe that old saying about the blacker the berry. Back when we were Negroes, the word ”black” was used to describe the dark-skinned among us, usually not with affection. My mama assured me that I was a pretty black girl, but it was the brothers on the streets, cooing such compliments as dark ”n lovely, chocolate drop, brown sugar, who convinced me.

I'm not sure how to break the news to this writer, but being a good enough-looking woman to have black guys shout stuff at you while you walk by is a pretty low hurdle...

But consider the complexions of most of the black women who smile or stare seductively at the world from the covers of celebrity and beauty magazines–cream, caf?© au lait, golden honey. Gorgeous sisters, yes, but we come in other good flavors, too. The failure to showcase dark-skinned beauties feeds the notion that pretty black girls are an exception. Not so much dark and lovely as dark but lovely.

I think of India.Arie’s song from a few years back.

"I’m not the average girl from your video And I ain’t built like a supermodel But I’ve learned to love myself unconditionally Because I am a queen.”

but even Arie acknowledges that many of us who don’t look like Barbie dolls–even chocolate-coated Barbie dolls–are not convinced of our beauty.

”I don’t know if young women necessarily think that certain women they see on TV are beautiful, but they do see that certain women are financially rewarded by looking a certain way and therefore that image is reinforced,” Arie told me via e-mail. She thinks that Michelle Obama’s presence on the national stage will ”jump-start the challenge of those long-held beliefs. Not only is she naturally and uniquely beautiful, but she demonstrates a great deal of poise, class and style, which I think has and will continue to help capture the nation’s attention in a positive way.”

As much as we’d like to think that everyone will be instantly enlightened, the truth is it might not have much of an immediate or noticeable impact.

A huge amount of female journalism consists of demands that society must be reorganized so that the author is considered more sexually attractive. (This is hardly the most egregious specimen of this vast genre.) 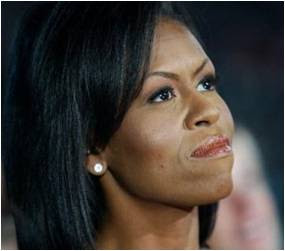 You'll definitely want to check out the expression on Mrs. Obama's face in the picture that The Root chose to illustrate Michelle's loveliness. Let's just say that when a husband sees his wife staring up at him with that expression, he knows he's in for a world of trouble.

Barack Obama's autobiography ends with his wedding to Michelle. The last line in this self-pitying book is:

"And for that moment, at least, I felt like the luckiest man alive."

The Luckiest Man Alive would seem like a pretty realistic self-description, but, judging from That Look she's apparently giving him in this picture, maybe he's not ...