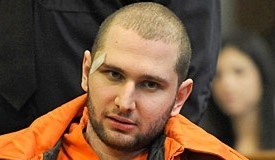 A "Brooklyn man" Named "Maksim Gelman"? CBS News and AP Seek to Cover Up Nature of Yet Another Case of Immigrant Mass Murder Syndrome (IMMS)

NEW YORK - A 23-year-old Brooklyn man accused of going on a wild stabbing rampage Friday and Saturday that killed four and wounded two others was finally caught in a tunnel in the New York City subway system Saturday morning.

All three were found dead by police….

[Stabbing Rampage Suspect Caught in NYC Subway; Man Accused of Stabbing 5 People, Running Down Another With Car, 4 Dead in All; Captured in Subway Tunnel by Anonymous, Associated Press/CBS News, February 12, 2011]

According to police, Gelman stabbed three people to death; committed carjacking against Art DiCrescento, 60, whom he sought to stab to death; murdered a 62-year-old man by running him down with DiCrescento’s Pontiac; and committed attempted murder by slitting the throat of a 40-year-old passenger on a subway train, over 24 hours after starting his rampage. Police caught Gelman trying to escape by running down a subway tunnel, after jumping off the train.

Police charge that before Gelman stabbed the subway rider, he pounded on the motorman's door, shouting,"My girlfriend ruined my life!"

By then the girlfriend, Yelena Bulchenko, had been dead for about 16 hours; the passenger is in critical condition.

I guess now the feds will have to ban knives and girlfriends, at least for men.

For a wealth of information on Immigrant Mass Murder Syndrome (IMMS), hit this link.