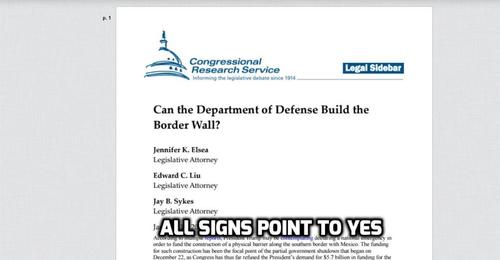 Ethnarch did have a few critiques of my view, and I am glad that someone of his notability has taken an interest in my letter, but I do not think he is correct in his assessment. First, he contends that President Trump would not have to declare a national emergency to utilize the law. I do not think that is right. I have already pointed out that 50 U.S.C 1435 requires that a national emergency be declared by the President or Congress, but the precedent surrounding the use of this law is also rather illuminating on the subject.

President Obama declared a national emergency when he used it to indemnify Ebola workers. Secondly, Ethnarch argues that the national emergency under Public Law 85-804 already exists by virtue of declarations by Presidents Truman and Eisenhower prior to the passage of the National Emergencies Act (NEA) in 1976. That does not appear to be accurate. Those declarations had to do with the spread of communism and the Cold War, and those reasons are specifically mentioned in the declarations. The Cold War has been over for quite some time (although the Democrats are trying to restart it). The spread of Ebola and construction of a border wall having nothing to do with the Cold War.

With that said, I will concede that Ethnarch could be right. There is very little caselaw on this subject, or anything of significant precedential value. A Court could very well conclude that Ethnarch is right, and that I am wrong. Our disagreement, however, appears to be entirely academic. It is a distinction without a difference. If Ethnarch is right, Congress has no power to stop President Trump because they stripped themselves of that power when passing the NEA. If I am right, Congress can no practical way of stopping President Trump because the Senate is controlled by the GOP who will prevent the passage of a concurrent resolution.

President Obama used his executive power to get things done outside the purview of Congress. It is now time for President Trump to do the same. He has a pen and telephone. President Trump, get those executive orders ready to roll on February 15th after Congress fails yet again to do the right thing.

When the National Emergencies Act was passed by the Congress in 1976, it specifically exempted Public Law 85-804, which had the effect of rendering 50 USC § 1435 inoperative.   Therefore, it has not been required that the President declare a national emergency to make use of Public Law 85-804 since 1976*.

The Administrator of the United States Agency for International Development (USAID) is authorized to exercise authority under Public Law 85-804, as amended (50 U.S.C. 1431 et seq.), to the same extent and subject to the same conditions and limitations as the head of an executive department or agency listed in section 21 of Executive Order 10789 of November 14, 1958, as amended, with respect to contracts performed in Africa in support of USAID's response to the Ebola outbreak in Africa where the contractor, its employees, or subcontractors will have significant exposure to Ebola.  This authority may be exercised solely for the purpose of holding harmless and indemnifying contractors with respect to claims, losses, or damage arising out of or resulting from exposure, in the course of performance of the contracts, to Ebola.

Presidential Memorandum—Authorizing the Exercise of Authority Under Public Law 85-804, November 13, 2014

The fact that Public Law 85-804 was enacted during the Cold War and that the proximate reasons for doing so was to confront chiliastic Communism is irrelevant.  It is on the books and is still active.  Utilizing Public Law 85-804 to build the Wall avoids both the need to declare a distinct national emergency as well as the potential for rebellious establishment GOP Senators to cooperate with Democrats in overriding a Presidential veto of a joint resolution terminating said state of emergency.

The State of the Union Address (currently, at least) scheduled for February 5th would be a salutary occasion for President Trump to invoke Public Law 85-804 as the basis for building the Wall.  Let's hope he does so with gusto.

James Fulford writes: Today I see in the news that the Congressional Research Service is saying something similar.

A final note from Ann Coulter:

Trump is like Dorothy in the Wizard of Oz. He ALWAYS had authority to build a wall on our border.