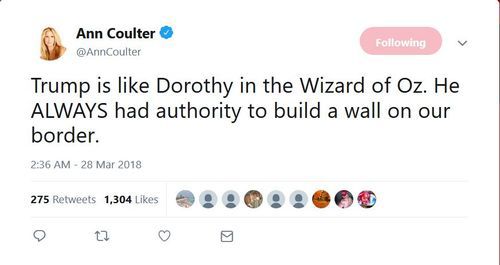 Re: James Kirkpatrick's piece Negotiate From Strength, President Trump! Some Ways To Change The Equation On Border Showdown and A Reader Has Legal Advice On How To Declare An Emergency

It's very gratifying to see Public Law 85-804 cited in an illuminating letter to vdare.com , in response to James Kirkpatrick’s piece which had cited our own discussion on the podcast FashTheNation.  A few clarifications will highlight how this law is even more useful than is apparent than at first glance.

In point of fact, POTUS doesn't have to declare a specific national emergency to make use of Public Law 85-804. All he must do is provide written notice to the chairs of the House & Senate Armed Services Committees six months in advance of any contracts entered into under the statute which would exceed $25M USD in cost, as the Wall certainly will.

This law was specifically excluded/grandfathered by the National Emergencies Act (NEA), and has been in a state of continuous, uninterrupted invocation since 1958 due to Executive Order 10789; this is why President Obama wasn't required to declare a separate state of emergency when he utilized this law in 2014. All President Obama had to do was issue a Presidential Memorandum stating that “USAID is exercising functions in connection with the national defense in the course of complying with its humanitarian mandate, and there is a relevant state of national emergency that authorizes the use of Public Law 85-804.”

So, the part in Section 1435 about the Congress having the ability to interfere by terminating a state of emergency doesn't apply as long as Executive Order 10789 is still in effect; this Executive Order has been updated and maintained over the decades, and there is no indication that POTUS has any inclination to rescind it.

Ethnarch can be heard regularly on the podcast FashTheNation.