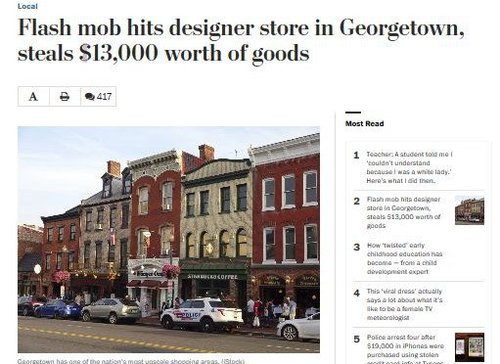 In the Washington Post article linked by Eugene Gant, we read this (my comments in square brackets):

"More than 20 people, police said, went into the store and grabbed several items off the racks, according to a police report. They stole four leather jackets, costing about $800, and an additional $12,000 worth of merchandise." [No description, other than "people" means what we all know it means.]. Police described the suspects only as juveniles. ["Juveniles", along with "youths", and "teens", again, only mean one specific group.]

"The incident comes after a group of merchants in Georgetown ended its use of a private messaging service that many retailers, residents and police officers had used to talk about people they thought were suspicious. There were concerns that the service was being used to racially profile people.

Some in the Georgetown area started using the app service in February, 2014 after the business organization — Georgetown Business Improvement District — worked with police in the District to launch it. The service called “Operation GroupMe” was meant, some in the area said, as a tool to try to reduce shoplifting in the area. Georgetown is one of the nation’s poshest shopping districts.

But a look at the bulk of the correspondence over a nine-month period of those using the service had some people expressing suspicions about African Americans. About 90 percent of the photographs that were put up showed blacks."[ Flash mob hits designer boutique in Georgetown, steals $13,000 worth of goods, Dana Hedgpeth and Peter Hermann, Washington Post, November 25, 2015]

In other words, this Politically Incorrect app (and the retail employees who used it) correctly identified who nearly all the criminals were, the criminals didn't like it, cried "racism!" and the pathetic white liberals decided they would rather be robbed and possibly even assaulted or worse, than be called racist—even if the photographs showing who the criminals were happened to show truth.

James Fulford writes: The earlier story—about the “racist” app—said this:

The correspondence has provided an unvarnished glimpse into Georgetown retailers’ latest effort to stop their oldest scourge: shoplifting. But while the goal is admirable, the result, critics say, has been less so, laying bare the racial fault lines that still define this cobblestoned enclave of tony boutiques and historic rowhouses that is home to many of Washington’s elite.

Since March of last year, Georgetown retailers have dispatched more than 6,000 messages that discuss suspicious people. A review by the Business Improvement District of all the messages since January — more than 3,000 — revealed that nearly 70 percent of those people were black. The employees often allege shoplifting. But other times, retailers don’t accuse these shoppers of anything beyond seeming suspicious.

“What did they look like?” a True Religion employee in May last year asked an American Apparel retailer who had reported a theft. “Ratchet,” the American Apparel worker replied, using a slang term for trashy that often has a racial connotation. “Lol.”

“Suspicious tranny in store at Wear,” reported one worker at Hu’s Wear in May. “AA male as female. 6ft 2. Broad shoulders.” Tranny is offensive slang for transgender.[The secret surveillance of ‘suspicious’ blacks in one of the nation’s poshest neighborhoods, By Terrence McCoy, October 13, 2015]

Obviously these reporters have no experience with working retail—and they don't care how much danger retail employees are in as long as no one is offended. This is the phenomenon I've referred to as "Civil Rights Law Doesn't Care If You Die".

However, in the "not reporting race" calculus, the point is that WaPo is willing to racially identify the people who frightened or worried the clerks, because they're condemning them for being frightened or worried. But when an actual mob storms into the store and steals more than $12, 000 worth of goods—WaPo doesn't consider race "relevant."