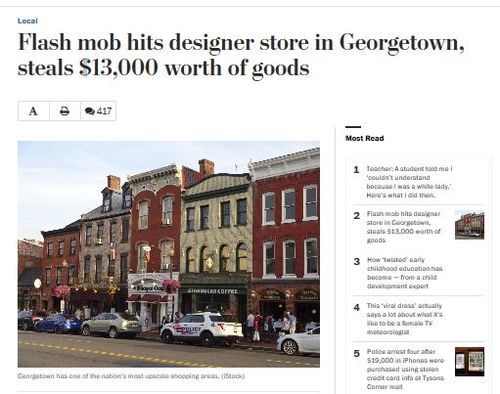 Apropos of my post detailing The Washington Post's telling us—in a front-page tease, a headline and the lead to the story—that five whites were suspected in the Black Lives Matter shooting, today we get this front page tease from the very same newspaper:

A large group of young people went into the Diesel store and grabbed several items off the racks, police said.

Here is the headline:

Here is the story's lead and second and third sentences:

A flash mob hit a designer store in Georgetown Tuesday evening and stole $13,000 worth of items, according to D.C. Police.

The incident happened just before 6 p.m. at the Diesel store in the 3000 block of M Street NW. A large group of young people went into the store and grabbed several items off the racks, according to a police report.

The Post doesn't tell readers what the suspects look like (not that it has to), but does note that the "incident comes after a group of merchants in Georgetown ended its use of a private messaging service that many retailers, residents and police officers had used to talk about people they thought were suspicious. There were concerns that the service was being used to racially profile people."

The comments are worth reading. Here are two of them: