A Woman Reader Remembers An Earlier Black Riot In Boston 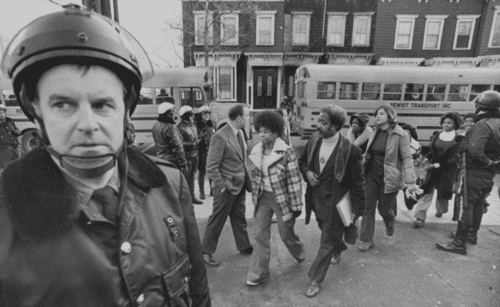 Re: James Kirkpatrick’s article The Ferguson Riots: Par For The Course In The “Black Community”

From: An Anonymous Victim Of The Busing Riots [Email her]

I was a young woman in Boston during the forced busing riots. It was the early fall of either 1976 or 77. I had a second job as a courier for a grocery store.

I would pick up film from the stores and drive them to the headquarters in Connecticut. I was also very naive about race at the time. Like most young people, I believed I could just be a nice person and no one would hurt me. I was wrong. At this time in Boston, the schools were bussing blacks to the schools in the white areas of the city.

People were being pulled from cars and beaten on both sides of town. I had to go to a store in Roxbury which was entirely black. I stopped at a red light when I found my car surrounded by blacks hitting my car with baseball bats. It was warm that night so the windows were down. I felt something make contact with the left side of my face. In terror, I looked both ways and ran the light, almost running over a lady who was trying to stop my car.

I got home and never said anything to the police as I was 19 and frightened. I went home and tried to take care of it myself, I didn't want to report it as I was afraid to be on the news and afraid that I would lose my job.

It was the Jimmy Carter era and jobs were scarce. I have a pretty ugly scar there to remind me every day that I do not want to live anywhere near blacks. I have pretty bad memories of being in the middle of that. I've had several treatments for the scar but nothing has made it much better.

I just don't want another one.