From: A Libertarian Woman Reader [Email her]

Minor technical/historical point: John Roy Carlson, author of Under Cover, was not an "amateur Nazi hunter"; he was an investigative reporter who put several years' personal research into the project. His book 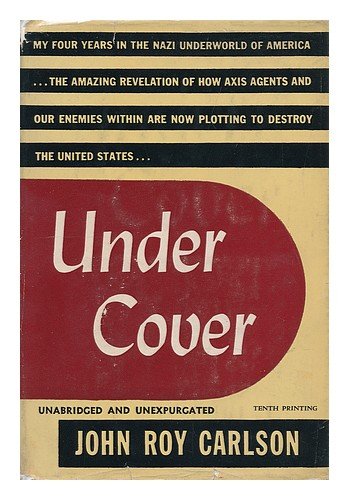 still notes some details of history that nobody else has covered, before or since — such as the Mexican Nazi movement, the Gold Shirts, whose newsletter was called "La Raza", a term they invented and popularized.

James Fulford writes: I replied to the reader to say that this was also a point we’d covered, in Allan Wall’s article Yes, La Raza Really Does Mean “The Race”—And The Idea Was Invented By a Nazi Sympathizer.

I don't think it's unfair to call Carlson an amateur. There's nothing wrong with amateurism. Much of the best work in the world is done by amateurs. My point was that Carlson was poking into pro- Nazi activities at a time when there was an actual Nazi government for people to betray America to.

The $PLC, by contrast, is not an amateur organization—they’re in it for the money.

When I asked the reader if we could publish her letter, she asked us to add this:

We can't expect the Big Two parties to stop the invasion of illegals.  The Republicans won't, because they want the cheap labor.  The Democrats won't, because they want the cheap votes.  The Libertarians, should they get into power, wouldn't use the federal government to stop the illegals — but they wouldn't prevent the states from stopping the invasion either.  I want to get a bumper sticker showing the usual Republican-Democrat symbols and saying: "A plague on both their houses.  Vote Libertarian.

An interesting point. One good thing about libertarians is that they not only believe government should stay out of people’s bedrooms, et cetera, they also believe that it should stay out of lunch counters as well—a point made by Hans-Herman Hoppe, among others.