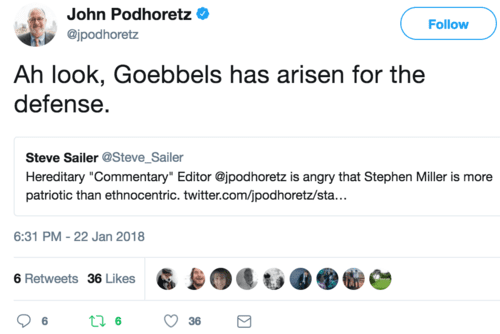 From: A West Coast Reader [Email him]

Mr. John Podhoretz, hater of immigration patriots and Americans in general, has gotten down from his high horse for just a second. He has called out and denounced the recent spate of monstrous comparisons between the President's immigration policies and Nazi perfidy.

Stop already with the Nazi and Hitler analogies. Really. Stop. What's happening is its own kind of bad and you court discrediting the seriousness of your complaints about it by overstating things so tastelessly and wrongly.

Apparently, there is no comparing the Nazis to anything and to do so is not only wrong—but tasteless. Well taste varies—some have it and some don't—but I'm old enough to recall when the JPod was calling either Steve Sailer or Mr. Stephen Miller “Goebbels.”

It seems to me that's it's barefaced chutzpah that someone who demands in the name of decency that we steer clear of the argumentum ad Hitlerium should use such language about either a pundit like Sailer or a patriot like presidential speech writer Miller. As always with these men of massive self regard it's rectitude for thee—but never for them.