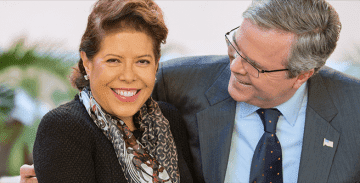 A Republican Contributor Gets An Email, In English, From Columba Bush, Headed: “¡Todos por Jeb!”

From: A Republican Contributor (But Not To Jeb!) [Email her]

This was an unwelcome surprise in the spam folder. A letter, headed “From: Columba Bush” which began

“It’s been nearly two weeks since Jeb started his campaign, and the enthusiasm so far has been amazing.

I’m so proud of him, and I know he appreciates everyone’s support. “

And then went on to ask for money.[See the whole letter at Wife, son, even President Dad stump for Jeb Bush campaign, Political Cortadito, June 29, 2015]

Note that the actual subject line to this email was ¡Todos por Jeb! Presumably the Reconquista fifth-columnists he employs found nothing offensive in Columba proudly utilizing her Chicana linguistics. A question that must be raised—is Jeb actually campaigning to be the president of the Sandinistas?

Also, WHY did Mitt turn over his mailing lists to Jeb? Everyone who tried their hardest to avert the imminent disaster of the Romney campaign back in 2012—via pledging email support—now finds themselves unwittingly supporting Jeb's Chicano Studies candidacy.

VDARE is a true national treasure—how did I ever live without it?

James Fulford writes: While no one really believes that the candidate—or his wife—pens these letters, the extra fraudulent point here is that Mrs. Bush is probably not capable of writing a short business letter in English. Steve Sailer has suggested that the most likely explanation for why “Columba Bush has such a low profile in the English-language media is because she’s never learned to speak English well.”