OK, it's a paraphrase. But the Gullible Old Pandaparty is making it very clear that it will accept anything—continued immigration, bilingual education, no assimilation (what does W. think it means to tell a Hispanic rally "venceremos"?)—in return for a (hypothetical, temporary) accession of votes.

There's a name for this: appeasement. The Progressive Conservatives tried it in Canada in the 1980s. They spurned their Western, Anglo base to buy votes in Quebec. It even worked—for a while. Then, guess what? The base went away.

The problems caused by U.S. immigration policy, however, will not go away.

FORBES magazine (8/21/2000) has just published my charticle on poverty. The message: there's been some harrumphing in the establishment media about the remarkable persistence of poverty in America, as measured by official statistics, despite this long boom. Needless to say, there's been absolutely no mention of the immigration dimension. Yet over a quarter (26%) of America's 35 million poverty population are immigrants and their children born here. And this influx must also have driven some native-born Americans into poverty, through its impact on wages. (Poverty's Roots- don't forget to click through to the chart.) 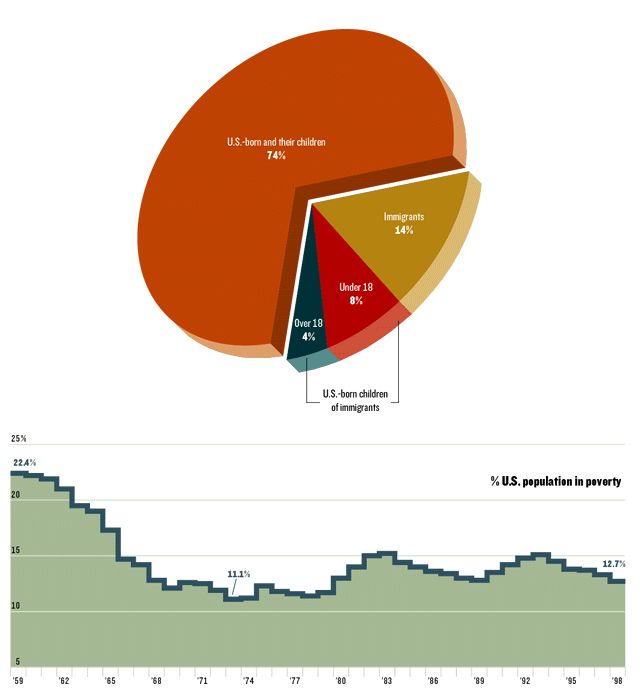 If I'd had the space, I would have made these further points:

Coincidentally, the Center for Immigration Studies has just put out a report on the immigration dimension of another much-hyped policy problem: American residents without health insurance. (Without Coverage by Steven A. Camarota, and James R. Edwards Jr.). Camarota and Edwards estimate that over a quarter (26.1%) of the uninsured population are immigrants.

Absent all uninsured people in immigrant households—basically, immigrants and their native-born minor children—the uninsured proportion of the U.S. population would go back to where it was in 1990. (Or even lower if adult native-born children of immigrants were counted.) We would not have been reading about this problem at all.

Bushes would no doubt still be springing up, in their weed-like way. But they would have their roots in some other, American, weakness.