From: A Bloomfield Hills Observer [Email Them] 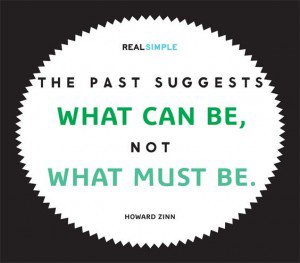 Real Simple magazine just arrived in the mail (monthly fruits of an unwise, nearly-forgotten door-to-door subscription) and I was somewhat taken aback by the prominence of this featured quote by one Howard Zinn—the notorious CultMarx sage and celebrated “education theorist”.

How is it, exactly, that the journey through ed-school manages to infuse one's already standard mediocre, vacuous prose (see: Zinn and Bill Ayers) into that which is still mediocre and vacuous yet additionally Bolshevik?

“The past suggests what can be, not what must be”—yeah, okay, Howard. 80 years ago Howard Zinn would've been that guy who delivered the letter to Mexico directing Trotsky's future murderer to put an ice axe in his head. (I believe David Horowitz wrote of this curious incident somewhere—if I recall, said letter courier was an actual friend of the family. Unbelievable.)

James Fulford writes: incident the reader refers to, quoted here, is in Horowitz’s Radical Son: A Generational Odyssey. David Horowitz was raised in a Communist family, and only learned of this years later. Zinn was the same kind of Leftist who spied for Moscow earlier, but apparently he felt he could do more good (="harm") as a Cultural Marxist.