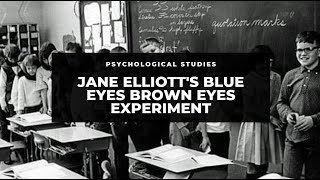 VDARE.com is the only place I can think of sending this video, as you frequently discuss the Cultural Marxism which controls much of the mainstream political debate.

It's a horrific video of a politically correct lesbian-looking goon lording over her students regarding matters of race, and of course it's being lauded all over the web.

Jane Elliott is a teacher and diversity trainer who developed the "Blue Eyes/Brown Eyes" exercise to teach students what it feels like to be a person of color. This video begins pretty abruptly, where one of the students who's been singled out based on eye color is extremely frustrated.[I Never Thought I'd Want To High-Five A Teacher For Yelling At A Student, But I Was Wrong, Upworthy.com]

It reminds me of nothing so much as a Communist re-education camp and, of course, the similarities are not an accident.

ex-schoolteacher who, in 1968, tried the experiment of dividing her all-white third-grade class into blue-eyed and brown-eyed children, and subjected the blue-eyed kids to discrimination, so that they could learn about racism.

She now travels around the world giving seminars in which she does the same thing to adults who are sent for diversity education by their employers.

My 2003 piece was called Jane Elliott: 35 Years of Rage, which we must now update to “45 Years”. It’s abusive, even if it’s not being done to actual children anymore. The whole thing gives the impression of being crazed and evil.