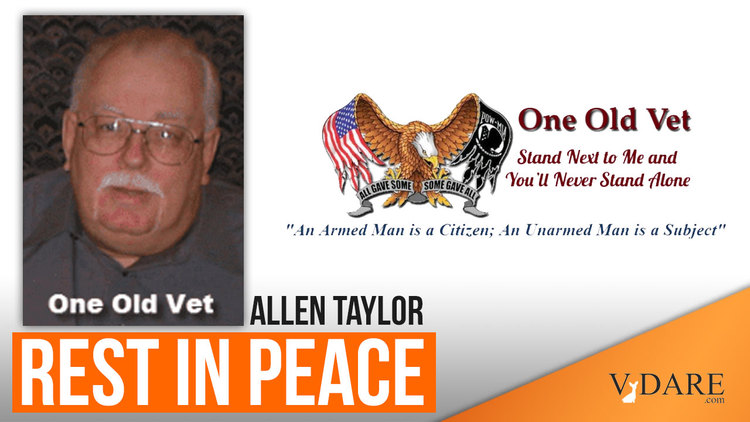 R.I.P. ONE OLD VET - A Great Patriot, Fallen In Arms

Very sadly, I force myself to write the VDARE.com obituary of One Old Vet (aka Allen Taylor). His wife Judy posted on August 26th

OOV spent the last 10+ years sharing his beliefs and knowledge with the OOV community. He lived, he loved, and breathed defending the Constitution of the United States. He was passionate about justice and believed in fighting for what was right for his country. He loved God, Family, and Country above all.One Old Vet’s final resting place will be at Crown Hill Cemetery, Indianapolis, IN, in “Field of Valor”

His last message to his friends was posted on the 13th

I am currently in the CCU of a local hospital awaiting surgery for an arterial bypass and replacement of the aortic valve. Surgery is scheduled for this coming Thursday, August 18th,

I have been told to expect a 7 to 10 day hospital stay following the surgery, then there will be a recovering/healing period following my release,

At this point I don’t expect to be back online before the 1st of September.

One Old Vet was an extraordinary phenomenon – and so must be his widow, to have tolerated his dedication to his projects.

His site was quite simply the most alert and wide-reaching news aggregator for items dealing with America’s immigration disaster. The Inside-the-Beltway immigration restraint outfits have never bothered to produce anything comparable.

I also used to joke with OOV that he was also de facto VDARE.com’s Art Director. Finding and choosing photographs takes more intellectual effort than those who have never done it realize: it also takes talent. Most of my favorites were picked by him for his site, and borrowed by us.

For quite some years my default mode in looking for a blog subject would be check One Old Vet and see what he had found. There was always something.

In the dreary months of 2013, when the Amnesty/Immigration Surge Bill was being protected by a virtual news blackout by the MSM, which frighteningly included the Drudge Report, I used to run blogs like Friday's One Old Vet Amnesty News Collection 18. Drudge 1 (Eventually)

All this took huge, backbreaking effort. In one of our fundraising appeals for him I suggested that he was working 10 hours a day at least. He wrote to ruefully concur. This of course was for no financial reward whatever. Our appeals were attempts to save him paying for equipment and operating costs from his own pocket.

In May 2015 OOV announced closing down. I expressed my thoughts on his work at more length in ONE OLD VET Ceases Publication: Please Thank This Great Patriot. DON’T Thank FAIR, CIS or NUMBERSUSA

But the noise of combat drew him back. The last OOV item I posted was I fear the all too prescient judgment OOV had on Mike Pence.

We at VDARE.com greatly benefited from One Old Vet’s work, and hope our links to him helped his site. It was an honor to do fundraising for him, modest though the results were.

As a young man OOV served in Vietnam. It is a wonder of the internet that an talented old man can fight for his country using it just as much as a young healthy man carrying weapons.

So I will remember OOV as a Patriot who fell in arms.

VDARE.com readers who appreciated OOV may like to leave condolences.