Help! Helen Krieble's Horse Farm Workers Want To Be Paid Too Much! 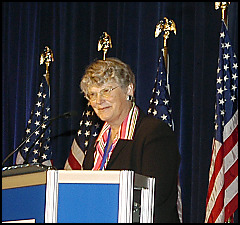 Life is tough for Helen Krieble, whose Illegal Immigration "Amnesty with a trip home attached" plan (as Tom Tancredo calls it) has now become "the Pence Plan" and is being used to try to split House opposition to the Bush Administration's effort to dissolve America.

We learn today (Coloradan rides into immigration fray By M.E. Sprengelmeyer The Rocky Mountain News July 3, 2006 ) that she not only has to decide which of two homes to use, how to spend the Loctite fortune she inherited, and which pet causes to support with her Foundation, but that her huge horse operation in Colorado is bothered by the annoying habit of U.S. citizens of wanting to be paid well.

farmers, ranchers and businesspeople around the country are unable to find American workers for certain jobs, even when they raise wages. "To criminalize those people - both the worker and the employer - for doing what's necessary in each of their lives without providing any legal way for it to work is immoral in my view,"

So there you are. It is necessary in Helen Krieble's life to have a monster horse outfit. For that, ordinary Americans must be subjected to massive economic erosion and the country turned into a Spanish speaking third world slum. This reminds one of Mayor Bloomberg's argument that mass immigration is justified because it supplies him with a more elegant golf course.

To gain legal status, the estimated 12 million workers in the United States illegally would have to return to their home countries, undergo background checks and health screenings, and reapply for jobs - potentially with their former employers. With the private sector in charge of the employment centers, Pence believes the turnaround time could be a matter of weeks.

The reference is to the 19th century author of Uncle Tom's Cabin, whose writings exposing the evils of slavery helped set the stage for the Civil War. It's rumored that when President Abraham Lincoln met Stowe, he famously quipped: "So this is the little lady who made this big war." Pence said that Krieble smiled when he told her she stirred the immigration fight the same way because her part-time home in Connecticut is not far from Stowe's historic residence.

In terms of the economic and political damage done to America by the Civil War, Pence may have a point. But putting aside the misapprehension that the war was primarily about slavery, one might wonder why Mexican peasants have the same moral claim possessed by America's blacks (huge losers under the Bush/Kennedy Amnesty/Immigration Acceleration Bill).

The fact is Helen Krieble is a fully accredited member of the Cheap Labor Lobby, her plan is a fraud, and Mike Pence is a contemptible disgrace. This boils down to a squalid attempt by a rich and selfish old woman to put her interests ahead of her less fortunate compatriots.