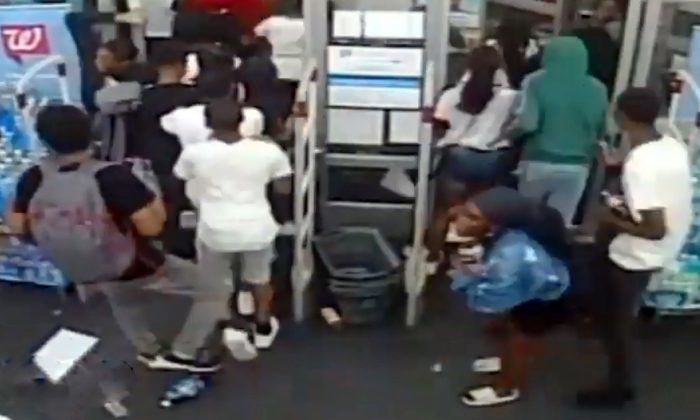 Picture above from a black mob raid on a Philadelphia Walgreens, July 4, 2019

From: John in Philly [Email him]

This ABC report from Philadelphia is titled

What they mean is black  students. Nobody else acts like this here in Philly. Cops are not on post every afternoon in Center City (the one nice part of town, since most blacks can't afford to live there) because of any other racial group.

Of course, with their usual cowardice, professional conservatives would rather wax hysteric about "white racism" or "anti-Semitism" (the latter being especially important to the “Religious Right” ) than deal with a real, politically incorrect issue such as black on white violent crime, this national but unspeakable epidemic.

There has been a problem of teenage flash mobs in Philly this year. Invariably black, and mostly male, the teenagers storm into Rite Aid, Wawa, and other stores, taking what they want and destroying merchandise. [‘They’re So Disrespectful’: Philadelphia Police Investigating After Several Teens Throw Ice At Wawa Customers, by Kimberly Davis, CBSPhiladelphia, July 10, 2019] Small wonder, then, that for some years now, every afternoon, starting at around 3 p.m. when the schools let out, Center City has been full of cops on the street. It is their task to maintain order amid the sometimes-unruly youth.

As it happens, those youth are disproportionately black, but social order is not any less important for that reason. And it would be no virtue, but rather a terrible vice, to read “racism” into this context and therefore fail to maintain order. Teenage flash mobs indicate a need for internal reform from communities themselves, but such reform is much less likely to happen if people can shirk the consequences of their actions via mindless cant about “racism.”

James Fulford writes: We did a lot of “flash mob” reporting in 2010-11 and Pat Buchanan’s column from that time, linked above, reported a stem-winding speech by Philadelphia Mayor Michael Nutter criticizing the black youths involved in explicitly racial terms, which he has permission to do because he is himself black.

In general, crimes like these respond to punishment (we use the phrase "ruthless coercion") and to shaming the participants. However, it is nowadays regarded as racist to do either of these things to black youth, so this will likely continue.