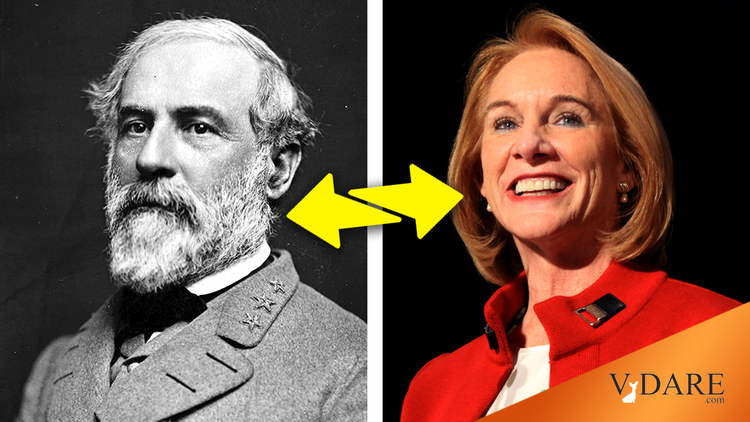 From: Jim Smith [Email him]

It is rare for me to have a complaint about VDARE.com, but I must express my annoyance at the gratuitous swipe at the Confederacy made by Judicial Watch's Tom Fitton in a tweet which VDARE.com retweeted earlier today.  Not only was it gratuitous, but plain offensive for him to compare the antifa rioters in Portland to the Confederacy:

.@realDonaldTrump can and should invoke the Insurrection Act and take other steps, as the Constitution authorizes, to restore a republican form government to the citizens of Portland. These new confederates must be stopped. https://t.co/dqCGxDo8Lz

For some reason, Conservatism, Inc. has made it a pet project to go after Confederate anything, from Robert E. Lee on through the ranks.  They've always been a craven lot, doing whatever they can to gain support, especially during a time when Confederate has once again become a dirty word.  Please assure me that this was a mistake.  Or maybe even that I've made a mistake in my interpretation.

Otherwise, keep up the great work, and best of luck against the deplatformers (and as you well know, I don't think Conservatism, Inc. is shedding any tears over your troubles).

VDARE.com Editor Peter Brimelow writes: I’m sure our tweetmeister (who is a loyal Southerner) was just attracted by the Insurrection Act idea—probably too numbed even to notice the Confederate reference.

The idea that what the mayors are doing is similar what Jefferson Davis did in the Late Unpleasantness seems very popular:

Under no circumstances will I allow federal authorities to resupply Fort Sumter! https://t.co/B7iZ9wwvfw

They don't mean that the Mayor of  Portland is a Christian gentleman, or that the other mayors are "a band of brothers and native to the soil" as the song says—it just means they're trying to start a second Civil War.